US terminates 1955 'Treaty of Amity' with Iran

Iran has criticized the decision to end the treaty, calling the Trump administration an "outlaw regime." The decision came hours after the UN's top court ordered the US to lift sanctions on humanitarian goods to Iran. 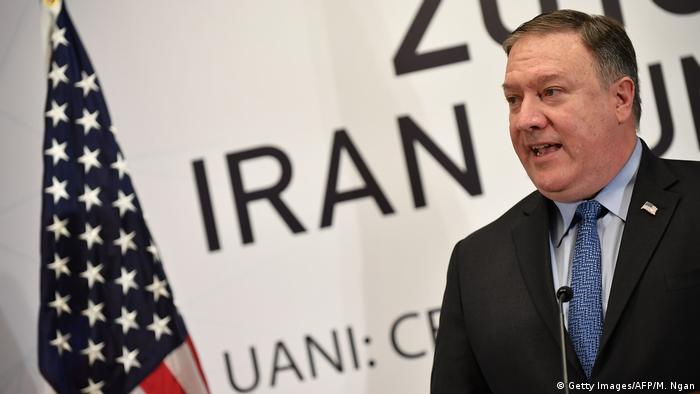 The United States is terminating the 1955 Treaty of Amity with Iran, Secretary of State Mike Pompeo said Wednesday.

Pompeo's announcement follows a ruling from earlier in the day by the International Court of Justice (ICJ), the United Nations' top court,  ordering the United States to lift sanctions on humanitarian goods to Iran.

In May, President Donald Trump announced a renewal of tough US sanctions on the Islamic Republic after abandoning the multilateral Iran nuclear agreement over its ballistic missile program.

Iran filed a lawsuit against the US at the ICJ in July, arguing that the sanctions violate the friendship agreement signed in 1955 between the two countries when Shah Mohammad Reza Pahlavi was in power.

The treaty, which established economic relations and consular rights between the two nations, continued to remain in force following the 1979 Islamic Revolution despite diplomatic tensions between Tehran and Washington.

Pompeo told reporters that the termination of the treaty should have happened long ago.

"This is a decision, frankly, that is 39 years overdue," Pompeo said. "Iran is abusing the ICJ for political and propaganda purposes and their case, as you can see from the decision, lacked merit."

The US move to end the Treaty of Amity, a largely symbolic gesture, highlights deteriorating relations between Washington and Tehran.

Pompeo said the practical fallout from the decision to terminate the decades-old treaty remains to be seen.

"This marked a useful point for us to demonstrate the absolute absurdity" of the treaty, he said.

"And America must receive another slap from the people of Iran with the defeat of sanctions."

He said Iran now faces a sensitive time. "On the one hand we have the shouting of the arrogant powers and politicians of imperialist
America...on another hand the economic problems of the nation and the tightness of the livelihood of a large portion of the weak people in the country."

More criticism of the ICJ

Following the ICJ ruling US national security adviser John Bolton also took aim at the court itself, calling it "politicized and ineffective." He announced the US would review all international agreements that could expose it to the ICJ's decisions, which are binding and cannot be appealed.

Bolton warned the US would also withdraw from the "optional protocol" of the 1961 Vienna Convention of Diplomatic Relations, which is often cited as a means to provide diplomatic immunity. In announcing the planned withdrawal, Bolton cited a case brought to the ICJ under the amendment by the Palestinian officials challenging the relocation of the US Embassy from Tel Aviv to Jerusalem.

Bolton added that "the United States remains a party to the underlying Vienna Convention on Diplomatic Relations and we expect all other parties to abide by their international obligations under the convention."

Iran has taken the US government before the International Court of Justice to demand the suspension of sanctions. Following Trump's decision to quit the nuclear accord, the US reimposed punitive restrictions on Iran. (28.08.2018)

The lawsuit comes after the US formed an action group to put additional diplomatic and economic pressure on Iran. The US reimposed the first wave of sanctions on Iran three weeks ago, with more to come in November. (27.08.2018)