The lawsuit comes after the US formed an action group to put additional diplomatic and economic pressure on Iran. The US reimposed the first wave of sanctions on Iran three weeks ago, with more to come in November. 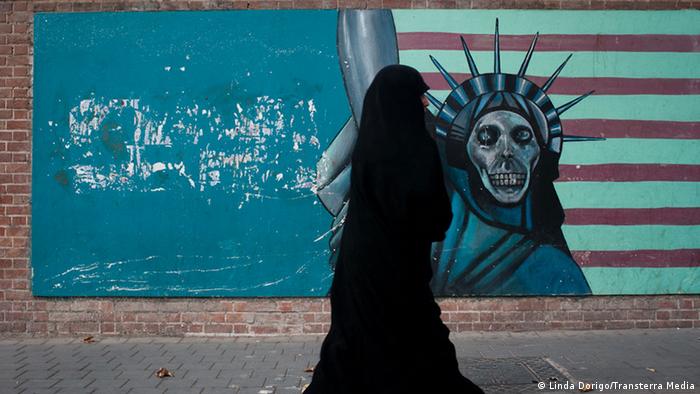 Iran on Monday asked the International Court of Justice (ICJ) to lift sanctions imposed three weeks ago by the United States.

US President Donald Trump reintroduced the penalties in an effort to force Tehran to end its nuclear weapons program, and a second round of sanctions taking effect in November are due to hit Iran's oil and energy sector.

How did we get here:

Iran suing US not unusual

Holly Dagres, a non-resident fellow at the Atlantic Council, told DW that the Treaty of Amnity has been referred to on numerous occassions by the US and Iran, dating back to the Iran hostage crisis that took place between November 1979 and January 1981.

"The fact that Iran has decided to sue the US over the reimposition of sanctions shouldn't be considered as unusual," Dagres said. "However, it's worth noting that Iran has not once referred to the ICJ when sanctions were imposed in the past."

Dagres said that while the Trump adminstration may argue that the treaty is no longer valid, previous US administrations have referred to it in the past.

Should Iran be unsuccessful at the ICJ, she said there would be little more they could do.

"If it doesn't work out at the ICJ, there aren't many options left for the Iranian government except to circumvent the sanctions, which they have a history of doing," Dagres said.

What is the 2015 Iran Nuclear Deal: The Iran nuclear deal was a historic diplomatic achievement to prevent Tehran's from developing a bomb. It lifted economic sanctions in return for Iran limiting its nuclear activities. The International Atomic Energy Agency monitors the deal and has said Iran has so far complied with all aspects.

War of words: The US and Iran have exchanged heated words over the deal. Donald Trump has called it a "horrible, one-sided deal," while Iranian Foreign Minister Mohammad Javad Zarif has accused Trump of "bullying" Tehran and violating the spirit of the international nuclear accord.

What is the Treaty of Amity and Economic Relations? The 1955 treaty emphasizes friendly relations between Iran and the US, while encouraging mutual trade and investments and regulating consular relations.

The US stance: Washington has not yet issued a public response and will respond formally in oral arguments on Tuesday. US lawyers are expected to argue that the ICJ should not have jurisdiction in the dispute, that the friendship treaty is no longer valid and that the sanctions do not violate it anyway.

The power of the ICJ: The ICJ is the UN tribunal for resolving international disputes. While its rulings are binding, it has no power to enforce them and they have been ignored by some countries in the past, including the US.

The US has formed a special action group to review and coordinate all Iran-related activity. German rail operator Deutsche Bahn and Deutsche Telekom are among companies ending business in Iran in light of US sanctions. (17.08.2018)

The US serves as a cornerstone of global trade and sometimes uses this position to punish rival nations. DW looks into key restrictions that Washington cuurently imposes on Iran, Cuba, Russia, North Korea, and Syria. (09.08.2018)