Is American student debt too big to fail?

As outstanding student loans pile up in the United States, many worry that the mountain of debt will be a drag on workers and consumers. The knock-on effects could be devastating for the wider economy. 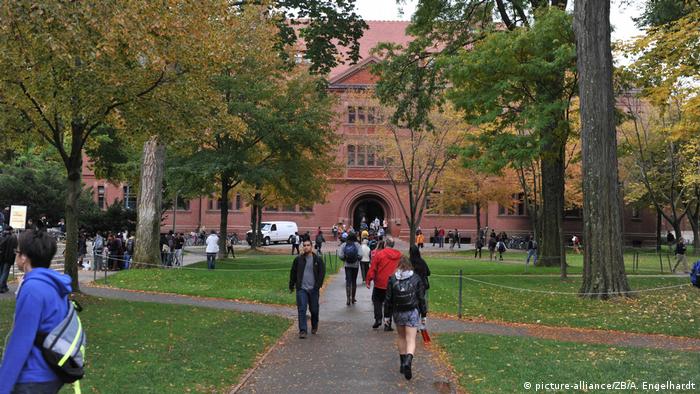 Student debt, an issue in many countries, is particularly a problem in the United States because of the high price of higher education. People who have student loan debts may hold off on buying cars or houses or setting up businesses. Debt can also affect credit scores, which could even keep borrowers from being able to rent apartments.

Many borrowers can't pay the money back right away. The country's bankruptcy laws don't help with student debt either; in most cases borrowers are still required to pay back the money.

Because most federal student loans are held by the Education Department, Joe Biden extended a pandemic moratorium on repayments through the end of September in one of his first official acts as president. He has also proposed $10,000 (€8,200) in debt forgiveness for every American with federal student loans. Democratic policymakers want more, much more.

"College should be a ladder up. For too many people, debt is the anchor that weighs them down and they rarely overcome it," Senate Majority Leader Chuck Schumer said at a press conference in February to announce his proposal to cancel up to $50,000 per buyer, which would wipe away a total of 80% of the nation's student loan debt covering 36 million people.

Currently, outstanding federal student debts in the US total about $1.6 trillion (€1.32 trillion). On top of that are private loans that add up to another $123 billion, according to academic data collector MeasureOne. Overall, student debt has more than doubled in the past decade. For around 43 million borrowers, the monthly repayment bills can turn into a long, devastating burden.

"Failing to repay a student loan can have serious financial consequences for borrowers. They can face collection fees, wage garnishment, damage to their credit scores, and withholding of federal benefits and tax returns," Sarah Sattelmeyer, director of the student borrower success project at the nonprofit Pew Charitable Trusts, told DW.

Besides that, the student loan repayment system is "complex, outdated and undermines borrowers' efforts to repay their loans," she said. It not just individual borrowers who are in trouble, though.

The wider impact of growing student debt default won't be a sudden crash like the 2007-2008 global financial crisis , which was caused by the housing bubble and mortgage-backed securities. It will be a long process that slows down many lives.Some think debt cancellation alone is not the answer and argue the whole system needs fixing. Solutions range from only lending to undergraduates, turning the screws on what schools charge and regulating for-profit colleges more rigorously. More basic ideas are educating young people about loans and debt before they take on such responsibilities or just making the government-backed loans interest-free.

Can your first job kill your career?

An increase in the amount of overall debt is not necessarily a bad thing. It could indicate that more people are going to school with the goal of having access to better-paying jobs, Sattelmeyer said. For her it is not the extremes or even the average debt load that count. "I tend to think that median is a more telling statistic than average for student loans, because some very high values among a small number of borrowers pull the average up." The median amount that borrowers owe today is about $20,000.

Many borrowers get in over their heads, and not everyone finishes school. "Counterintuitively, borrowers who owe the least — often less than $10,000 — and may not have completed their programs of study, default on their loans at higher rates than those with larger balances," Sattelmeyer said.

It is the number of borrowers who default on loans, meaning that they haven't made full repayments for nine months, that is causing alarm. Today a quarter of borrowers will default on their student loan within 12 years of starting college, according to Judith Scott-Clayton, an associate professor of economics and education at Columbia University.

"One in four borrowers defaulting is way too many to experience such a negative consequence from college enrollment. And default rates are much higher for nongraduates as well as for Black borrowers regardless of their graduation," Scott-Clayton told DW.

In the US, there are structural hurdles that often mean that people do not always benefit equitably from higher education. "Research indicates that Black borrowers have fewer resources with which to finance a college degree, they borrow more while in college, and they earn less afterward. They also are more likely to experience growth in what they owe after leaving school and are more likely to default on their loans, even when they have college degrees," Sattelmeyer said.

Scott-Clayton said the student loan system — especially the repayment system — was complicated to navigate and problematic. "Not only will it cause harm for yesterday's borrowers, but it will also make tomorrow's students think twice before pursuing college," she said. "And we know that the whole economy loses out when college attainment does not keep pace with the demand for college-educated workers." Scott-Clayton said a good start would be to lower costs for the first two years of college and automatically enroll borrowers in income-based repayment plans that would protect them against loan default would be a good start to keep many students on track and out of a downward spiral.

Whether Biden or Congress really cancel any debt remains to be seen. It is a decision that could have a huge impact on millions of lives by pulling them out of debt and free up capital to boost the domestic economy.

The woes of generation lockdown

The dramatic reversal comes as a court hearing was getting underway on a lawsuit by two elite US universities challenging the rule.

The prestigious university's admission process is "not perfect," but doesn't discriminate against Asian-Americans, ruled a judge a year after the case was heard. Complainant group SFFA is looking to appeal the verdict.