Student debt may inch US toward next financial crisis | Business | Economy and finance news from a German perspective | DW | 09.01.2019

Student debt may inch US toward next financial crisis

Debt accumulated by US students has never been higher than in 2018, estimates show. Student loans account for the second-biggest pile of debt in the US, only trailing mortgages. Sophie Schimansky reports from New York. 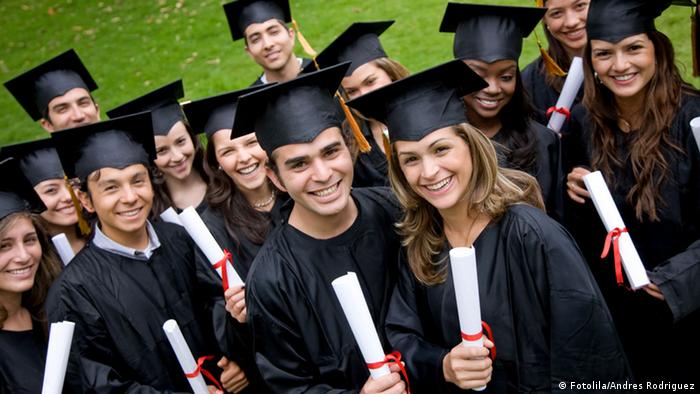 Toni Vincent got her master's degree in public health three years ago. For her studies, she needed to take out a six-digit-dollar loan before receiving her first paycheck.

Meanwhile, Vincent has taken up the job of a program manager at a non-profit organization and coordinates public health projects. Three years into her job, she's still sitting on a debt pile of $80,000. She's 32 and only starting her career.

Vincent is one of 44 million Americans burdened with student loans. Together, they owe a total of $1.5 trillion, a record sum only exceeded by mortgages. Student loans make up almost 7 percent of the United States' aggregate debt. Add to this the $64.2 billion in private student loans, issued by banks and other institutions.

According to a June 2018 study by the Federal Reserve, 42 percent of all students in the US had to take out loans for education, with average debt among 20-year-olds amounting to $25,000, and counting.

Those who started their studies in 2016, are likely to have accumulated an average debt of some $37,000. The director of the American Council on Education, Jon Fansmith, says the number of students in the US is growing. "More people are going to school, and more people are borrowing, and that's not necessarily a bad thing."

For Toni Vincent, it was never a question of whether to study at all. She calls it an investment in her future. But that investment is getting bigger and bigger. Costs for students have quadrupled over the past three decades. Being at a state college for four years now costs some $20,000 on average, studying at a private college for the same period can even cost up to $50,000.

Students are required to pay back an average of $351 a month, often for decades on end. A considerable proportion is unable to pay back anything after just two years, thus defaulting on the loan.

Constantine Yanellis teaches finance at New York University and has focused her research on student loans. She confirms that of the over 40 million indebted students in the US some 10 percent default within 2 years of starting repayment.

In 90 percent of such cases, the state is the creditor, meaning that taxpayers have to foot the bill eventually. The trend is alarming as more and more students are bound to default on their loans in the future. Estimates by the Brookings Institute say that some 40 percent of indebted students may default by 2023. That has the media comparing this development with the collapse of the Lehman Brothers investment bank and the ensuing global financial crisis in 2008.

CNBC is talking of a bubble, while Fox News and MarketWatch are already calling it a crisis.

Before the 2008 disaster, mortgages for households with a low creditworthiness had been bundled and sold on as risky financial products. In the end, lenders had to be rescued by the taxpayer. This time around, it'll again be the taxpayer who will have to foot the bill.

US students' debt burden may negatively impact the national economy in the long term, as young people will have no money to buy cars and homes and will generally consume less, as Fed chief Jerome Powell pointed out to Congress in March of last year. He called the debt burden a macroeconomic risk.

"It's not something you can pick up in the day right now, but as student loans continue to grow they can absolutely hold back growth," Powell warned.

The previous US administration under Barack Obama intended to provide some help with the Student Loan Forgiveness Program meant to ease the plight of those working in the public sector after their studies. But the Department of Education has just announced that under Donald Trump some 99.5 percent of all applications under that program have been turned down. In fact, the Trump administration wants the program to expire.