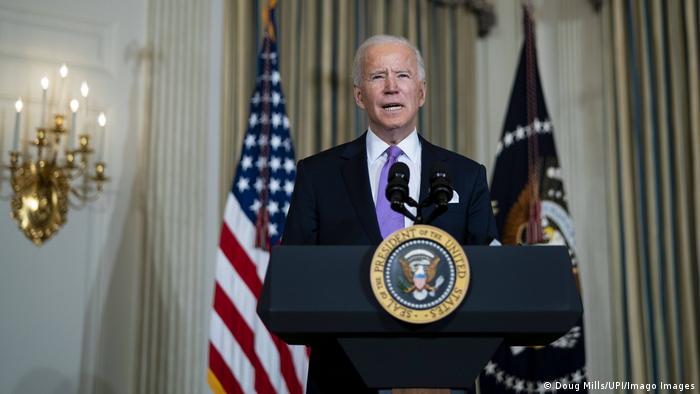 "Now is the time to act," says Biden, "I firmly believe the nation is ready to change but government has to change as well."

US President Joe Biden signed four new Executive Orders on Tuesday in an effort to foster racial equity in the country. Domestic Policy Council Director Susan Rice outlined the moves in a White House press conference earlier in the day and the president delivered remarks during a signing ceremony.

Speaking at the White House, Biden said that "deep racial inequities and systemic racism" had "plagued our nation for far, far too long." He said the killing of George Floyd made it impossible to ignore the problem any longer and "marked a turning point in this country's attitude toward racial justice."

In his remarks, Biden spoke of the disproportionate suffering that COVID-19 had brought on minority communities. In stark terms, the president pointed out that, "40% of front-line workers — nurses, first responders, grocery store workers — are Americans of color," before noting that, "1-in-7 families of color … reported that they don't have enough food to eat — in the United States of America." Blacks and Latinos he said were "dying of COVID-19 at rates nearly three times that of white Americans. It's not white Americans' fault, it's just a fact."

George Floyd laid to rest amid calls for racial justice

Not a 'zero-sum game'

Biden lamented the fact that many had come to see America "as a zero-sum game." He insisted this was not the case, arguing that racial equity would not mean gains for some at the expense of others but rather that all Americans would benefit, not only morally but financially as well.

At a press conference earlier in the day, Rice, a Black woman of Jamaican descent, underscored the personal nature of her work spearheading the effort before telling reporters that "for too many American families, systemic racism and inequality in our economy, laws and institutions still put the American dream far out of reach. Today, the average Black family has one-tenth the wealth of the average white family."

Rice contended "the US economy has lost a staggering $16 trillion (€13.1 trillion) over the last 20 years because of discrimination against families of color." She cited economic estimates suggesting that the US economy could add $5 trillion over the next five years by closing racial gaps. She said that building an equitable economy would prove essential for Americans to thrive in the 21st century.

US: Election campaign on reservations

Before signing the orders, Biden said he had directed the Department of Housing and Urban Development (HUD) to "redress the historical racism in federal housing policies." He said that housing was not only a right in America but that home ownership was an important stepping stone to generational wealth creation.

Biden also said that respecting Tribal sovereignty would "be a cornerstone of our engaging with Native American communities." Rice's earlier remarks pointed out the "devastating" effect the health and economic crises were having on Tribal communities. Biden promised more access to federal agencies in an effort to begin righting this historic injustice. The US Centers for Disease Control (CDC) reports that Native Americans with COVID-19 are dying at twice the rate of whites.

Another Executive Order will reduce the US government's reliance on private prisons. It will bar the US Department of Justice (DoJ) from renewing contracts with private prison operators. Biden called it "the first step to stop corporations from profiting off incarceration that is less humane and less safe" and "the first step in confronting systemic problems in the criminal justice system."

According to a 2013 US Department of Justice report, roughly 2 million adults were being held behind bars. Some 8.4% of them (133,000) were housed in private prisons. The Sentencing Project, a Washington DC-based advocacy group, says that in 2017 that number had fallen slightly, to 121,718 people, or 8.2% of the country's prison population. A multi-billion dollar business, in recent years banks such as Wells Fargo, Bank of America and JP Morgan Chase have all invested in private prisons.

Biden also signed an Executive Order "directing all federal agencies to take steps to combat xenophobia and acts of violence against Asian-Americans and Pacific Islanders," whom Rice said "have been targeted by political leaders in our nation's response to COVID-19."

'Understanding and truth, not ignorance and lies'

The president emphasized his administration's "commitment to diversity, equity, inclusion and accessibility," noting: "That's why I'm rescinding the previous administration's harmful ban on diversity and sensitivity training and abolishing the offensive, counterfactual 1776 Commission. Unity and healing must begin with understanding and truth, not ignorance and lies."

The 1776 commission was established in September via an Executive Order of Trump's, claiming to seek to promote a "patriotic education" for young Americans.

Biden ended by speaking of the need to "restore and expand the Voting Rights Act" in order to fight voter suppression in the states and "expand access for all eligible voters."

Circling back to his main policy motivation, Biden said: "The simple truth is, our soul [as a nation] will be troubled as long as systemic racism is allowed to persist." He called it "corrosive, destructive and costly," saying that it made the country "less prosperous, less successful and less safe."

Before signing the orders, the president ended his remarks by saying, "I firmly believe the nation is ready to change but government has to change as well."