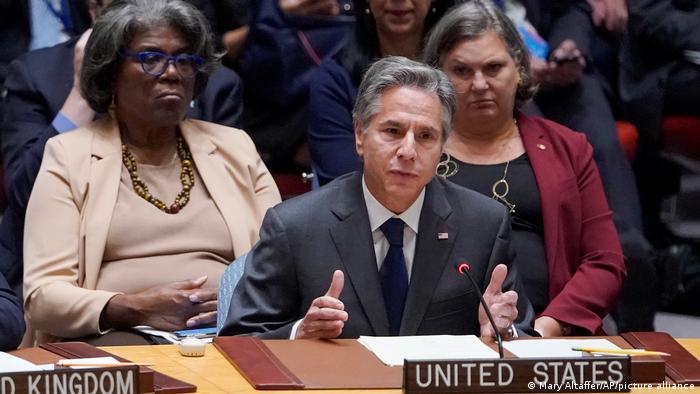 The United States stepped up criticism of Russia for its war on Ukraine during Thursday's UN Security Council meeting.

"Putin chose not to ease tensions, but to escalate ... The international order is being shredded before our eyes," US Secretary of State Antony Blinken told the Council.

Blinken said the world "cannot let Putin get away" with it.

In an opening address, UN Secretary-General Antonio Guterres said the latest developments in Ukraine are "dangerous and disturbing" and debate around possible nuclear conflict was "totally unacceptable." Guterres added that he is deeply concerned about Russia's plans to organize so-called "referenda" in Ukrainian territory its troops currently occupy.

Reporting from New York, DW political correspondent Michaela Küfner noted that Guterres called the conflict in Ukraine a "war on human rights" but needed to maintain the appearance of "remaining neutral and remaining a mediator."

However, Küfner pointed out that the Security Council would likely be unable to take concrete action against Moscow, as Russia is a permanent member with veto power over any of the Council's votes. 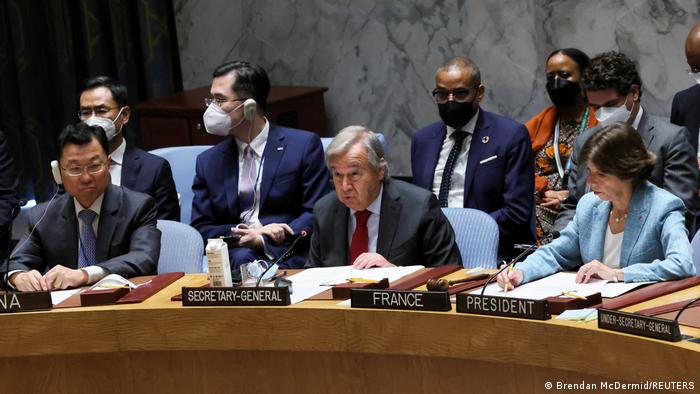 On Wednesday, Russian President Vladimir Putin said he signed a decree calling for partial military mobilization and made a veiled threat to deploy nuclear weapons.

"When the territorial integrity of our country is threatened, we will certainly use all the means at our disposal to protect Russia and our people. This is not a bluff," Putin said.

German Foreign Minister Annalena Baerbock told the Council that President Putin needs to stop his war on Ukraine. "This is a war you will not win," she said, without naming him. "Stop sending more of your own citizens to their deaths."

Baerbock also dismissed Russian plans for partial mobilization, saying no lines were forming in Moscow of volunteers seeking to join the conflict.

"What we see instead are brave men, women and even children taking to the streets because they do not want to be part of this war against Ukraine," she said.

Russia's Lavrov says West a 'party to conflict' in Ukraine

"The West is pumping Ukraine full of weapons to drag out the war, to wear down and weaken Russia," Lavrov said, adding the weapons deliveries to Ukraine makes the West "a party to the conflict."

"We have no illusions that the armed forces of Russia are being opposed not only by the Kyiv regime but the military regime of the collective West," he said

Meanwhile, Ukrainian Foreign Minister Dmytro Kuleba told the Council that Russia has no interest in holding peace talks with Kyiv to end the war.

"The Russian leadership is seeking a military solution only," he said.

Kuleba also accused Russian diplomats of an "extraordinary level of lies" and said that Putin's decision to partially mobilize the reservists is an admission of defeat.

"Putin announced a mobilization but what he really announced before the whole world was his defeat. You can draft 300,000 or 500,000 people, but you will never win this war," Kuleba said.

On Wednesday, US President Joe Biden assailed Putin at the United Nations General Assembly, for what the US leader called Russia's "egregious violations" of the UN Charter and international law.

"If nations can pursue their imperial ambitions without consequences, then we put at risk everything this very institution stands for. Everything."

Ukrainian President Volodymyr Zelenskyy, who was granted special permission to address the assembly by video, demanded more action from world leaders to punish Russia for its invasion,

Zelenskyy vowed that his forces would not stop until they had reclaimed all of Ukraine. "We can return the Ukrainian flag to our entire territory. We can do it with the force of arms," Zelenskyy said. "But we need time."

"Russia wants war. It's true. But Russia will not be able to stop the course of history," he said, declaring that "mankind and the international law are stronger'' than what he called a "terrorist state."