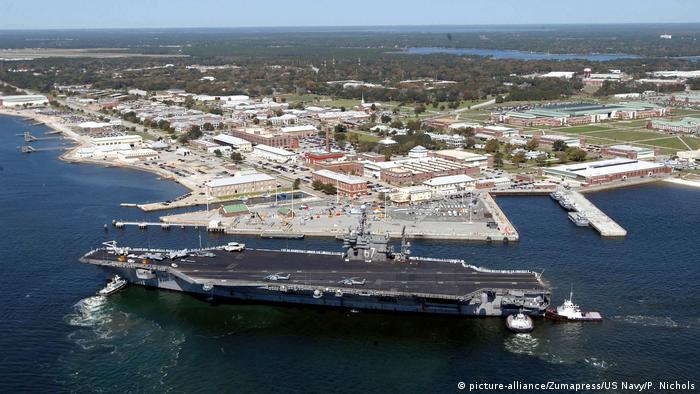 The Saudi man who opened fire at a naval base in Florida had earlier hosted a dinner party where videos of mass shootings were shown, US sources said on Saturday.

Three other Saudi nationals were said to have been at the dinner, which took place earlier in the week, prior to the attack, sources close to the investigation told AP.

Just hours before the shooting spree, the suspect is said to have posted criticism of US foreign policy, in addition to quotes from former al-Qaida leader Osama bin Laden, on Twitter, according to a group that monitors online extremism.

The shooting on Friday, inside a classroom at Naval Air Station Pensacola, in Florida, left three people dead and eight others wounded. The shooter was killed on site by sheriff's deputies.

Authorities confirmed the man was a second lieutenant in the Royal Saudi Air Force and was enrolled in flight training at the base, as part of a US Navy program designed to foster links with foreign allies.

But officials investigating the deadly attack have yet to determine his motive, whether he acted alone and in particular, whether the incident would be considered a terrorist attack.

Defense Secretary Mark Esper told reporters on Saturday that the shooting was not considered an act of terror "at this time."

Ten Saudi students were being held on the base Saturday, while several others were unaccounted for, an official speaking on condition of anonymity told AP.

President Donald Trump said on Saturday that he was in close contact with Saudi authorities, saying King Salman would help with the investigation.

"I spoke with the King of Saudi Arabia. They are devastated, Saudi Arabia. We're finding out what took place, whether it's 1 person or a number of people. The King will be involved in taking care of families & loved ones ... they're going to help out," Trump said.

The US president also said he would review the policies that allow foreign service members to train in the US.

"This has been done for many decades,'' Trump said. "I guess we're going to have to look into the whole procedure. We'll start that immediately."

Currently more than 5,000 foreign students from 153 countries are in the US for military training; more than 850 are from Saudi Arabia.

The shooting in Pensacola was the second to take place at a US naval base in one week. It followed an incident in Pearl Harbor, Hawaii, on Wednesday, when a sailor shot three civilian employees before taking his own life.

An "epidemic of gun violence" has prompted San Francisco Council to officially label the National Rifle Association a "terrorist organization." The move sparked a war of words with weapons advocates. (05.09.2019)