Saudi national opens fire at US Naval station in Florida 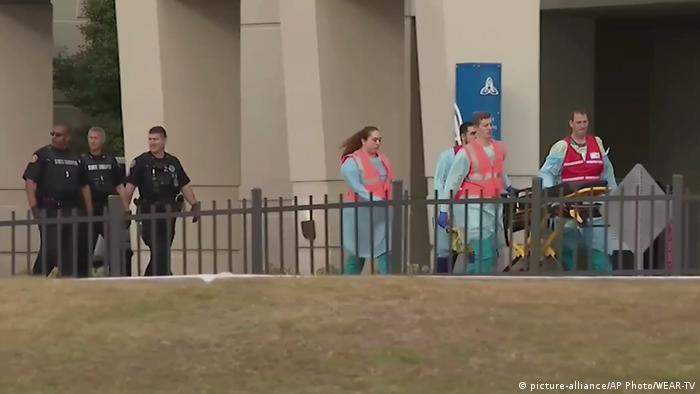 Four people, including the shooter, died on Friday at the Pensacola, Florida Naval Air Station. This marked the second deadly shooting at a US military facility in less than a week.

The base employs about 16,000 people, including 7,400 civilian personnel. Members of the military are usually restricted from carrying deadly weapons around military installations unless their daily duties require it.

The alarm was raised at around 7:00 a.m. local time, and a sheriff's deputy shot the assailant dead just a few minutes later. As well as the three fatalities, seven other people were taken to a local hospital to be treated for injuries.

Two of the injured were sheriff's deputies, one had an injured arm and one a wounded knee, but both were expected to survive.

"Walking through the crime scene was like being on the set of a movie," Sheriff David Morgan said at a press conference.

Shooter a Saudi airman with grievances against US foreign policy

Later, it emerged that the gunman was a citizen of Saudi Arabia. He was was part of the Saudi Air Force and apparently in the United States in an official capacity.

It was revealed that the assailant appeared to hold grievances about US wars. Just hours before the shooting spree, he posted criticism of US foreign policy, in addition to quotes from al Qaeda leader Osama bin Laden, according to a group that monitors online extremism.

"There is obviously going to be a lot of questions about this individual being a foreign national, being a part of the Saudi Air Force and then to be here training on our soil," said Florida Governor Ron Desantis

"The government of Saudi Arabia needs to make things better for these victims," Desantis added. "They are going to owe a debt here."

President Donald Trump said that Saudi Arabia's King Salman had called him to express his condolences.

King Salman condemned the shooting and expressed "his sorrow and grief," the Saudi embassy in Washington said in a statement after the call with Trump on Friday.

The statement read that "the perpetrator of this heinous crime does not represent the Saudi people, who count the American people as friends and allies."

Salman "directed Saudi security services to cooperate with the relevant American agencies to uncover information that will help determine the cause of this horrific attack."

The shooting came just two days after a 22-year-old active duty sailor opened fired on three civilian employees at the naval shipyard at Pearl Habor in Hawaii. Two of his victims succumbed to their injuries, and the attacker fatally shot himself before police could intervene.

Popular German musicians took to the stage in Halle for a concert dedicated to the victims of the recent far-right attack. A heavily armed man killed two people after trying and failing to enter the local synagogue. (19.10.2019)