US journalists had praise for their German colleagues after a White House press conference with Chancellor Merkel and President Trump. DW's Brent Goff said US reporters were "shocked" by the pointed questions. 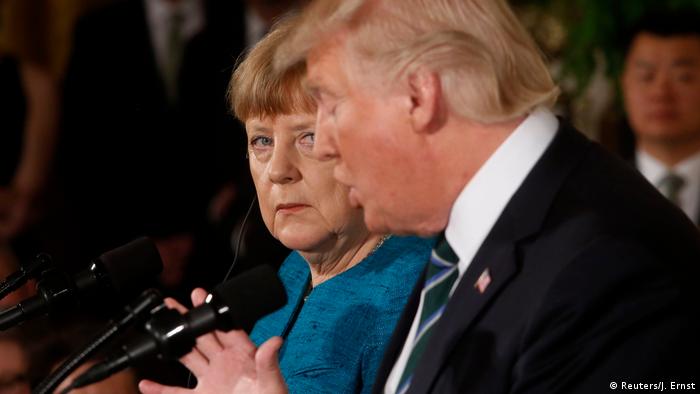 US President Donald Trump claimed that German news agency reporter Kristina Dunz was interested in "fake news" when she asked him about isolationist policies. In her report, Dunz later wrote, "It is no longer a custom in the White House that hard, uncomfortable questions receive factual answers."

The president also used a question from "Die Welt" journalist Ansgar Graw about his statements on Twitter to joke that he and German Chancellor Angela Merkel "had something in common, perhaps," in that their phones were tapped. The president did not mention that proof of the National Security Agency listening in on Merkel's phone existed. Trump also failed to provide evidence backing up his bombshell claim that former President Barack Obama had wiretapped his communications.

Those were two of the tough questions Trump faced during a press conference Friday with Merkel that led US journalists who cover the White House to praise the tenacity of their German colleagues.

Trump was also asked point-blank by one reporter why he keeps making statements he knows are not true. It was a question that DW's Brent Goff said "shocked" US reporters.

Ryan Lizza, a writer for "New Yorker" magazine also remarked on the difference in questioning style.

The straightforward line of questioning visibly put off Trump, according to Goff.

Lawmakers have denied the request, warning that they could subpoena the department for the evidence. President Donald Trump has made unsubstantiated allegations that his predecessor ordered targeted surveillance of him. (14.03.2017)

There is an easy way for President Trump to prove the serious allegation that his phone was tapped by the Obama administration during the election race. Simply order the declassification and publication of the material. (06.03.2017)