US President Donald Trump leveled accusations of espionage against his predecessor, Barack Obama. The allegations came after a series of leaks against Trump's administration, revealing contacts with Russia. 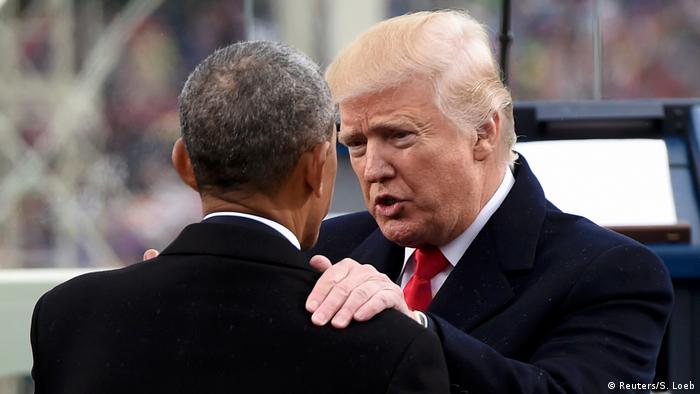 US President Donald Trump claimed on Saturday that former President Barack Obama wiretapped his phone during the 2016 election.

He did not reveal the source of the information posted in the early morning tweets.

Kevin Lewis, a spokesperson for Obama, said there was no merit to Trump's claims, for which the president also offered no proof.

"Neither President Obama nor any White House official ever ordered surveillance on any US citizen," Lewis said. "Any suggestion otherwise is simply false."

One of Obama's top adviser's, Ben Rhodes, also tweeted a scathing reply that rules were in place to prevent presidents from ordering wiretaps.

Trump's allegations were downplayed in a Fox News interview on Saturday with Representative Eric Swalwell, a Democrat who is a member of the House Intelligence Committee, which is charged with oversight of the US Intelligence community.

"I think this is just the president up early doing his routine tweeting," Swalwell said. "Presidents don't wiretap anyone. These are pursued by the Department of Justice in accordance with the FBI and signed off by a judge."

The allegations came as Trump's administration faced further scrutiny for his campaign team's contacts with Russia prior to his inauguration.

His first address to Congress was overshadowed by the revelation that trusted ally Attorney General Jeff Sessions met twice with the Russian ambassador and failed to disclose it during his confirmation hearing in the Senate. The scandal led to Sessions recusing himself from any investigation of the Trump campaign's possible contacts with Russian officials. Some Democrats called for Sessions to resign.

Trump's former national security adviser, Michael Flynn, resigned in February after lying about his conversations with Russia's envoy to the US prior to Trump taking office.

In recent weeks, Trump railed against almost daily leaks that exposed his administration's close ties to Russia and destabilized his presidency. Press Secretary Sean Spicer confiscated staffers' phones in a bid to track down the leakers, according to leaked information.

Reports: US Attorney General Sessions did not disclose meetings with Russian envoy during confirmation hearing

US Attorney General Jeff Sessions reportedly failed to disclose at his confirmation hearing that he met with Russia's ambassador twice last year. The meetings took place at the height of alleged Russian campaign hacking. (02.03.2017)