Considering their rocky past, the first meeting between Donald Trump and Angela Merkel went reasonably well. But behind the assurances about the continuity of transatlantic ties were detectable tremors. 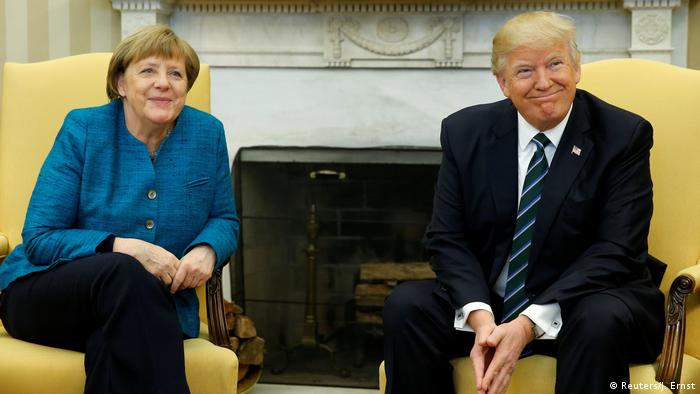 If the cancellation of their previously planned meeting due to severe weather in Washington could be perceived as a fitting symbol for Chancellor Merkel's and President Trump's earlier relationship - frosty, if not icy - then today's weather in the US capital - sunny, but crisp - might have served as a sign that the two are trying to move beyond past grievances.

And their public statements during the highly anticipated press conference only underscored the palpable wish to restart the personal relationship between both leaders, after Trump's vicious comments about Merkel during the election campaign, and to restore the traditionally close partnership between both countries, which has been in question ever since Trump took office.

It was, of course, up to Trump try to reset the relationship with Merkel and to reaffirm the commitments to transatlantic ties, and at first glance, he did.

He praised and vowed to continue the German-American partnership and the values it rests on. He declared his support for NATO. He praised Berlin's leadership role in Afghanistan and in the Ukraine conflict. He lauded Germany's apprenticeship model and expressed his hope to bring some of those practices to the US for the benefit of American workers. And he agreed, as Merkel stated, to participate in the G20 meeting to be held this summer in Germany, even though he generally prefers bilateral talks to multilateral ones.

Merkel did her part as well and expressed not just that she understands one of Trump's key themes, namely that America's European allies should pay more for their own defense, but that Berlin was doing something about it and was ready to increase its military outlays.

So even Trump's rapport with Merkel, seen through this narrow lens, could be interpreted "as a personal reset in the relationship as the tone was cordial, collegial and respectful," said Jeffrey Anderson, who directs Georgetown University's Center for German and European Studies.

The obvious exception was Trump's joking comparison of Merkel's surveillance experience, which was real, with his, for which no evidence is known to exist.

"Joking about the US surveillance of Merkel is probably the most tone-deaf moment so far of Trump's time on the international stage," saidStephen Farnsworth, a scholar of the presidency and the media at Mary Washington University. "Trump needs to remember that he doesn't need to crack jokes like he is still on reality television's 'The Apprentice.'"

Farnsworth pointed out that the two leaders didn't even engage in the traditional handshake during an Oval Office photo opportunity earlier in the day. "Merkel's offer to do so was met with an awkward silence that served as a reminder of the deep gulf between their perspectives."

Below the surface, things were not as smooth as it seemed. That is because on some crucial issues, including trade and the EU, Merkel and Trump took a very different tack. But that is not entirely accurate since Trump - in a noteworthy and unusual move for a US president - did not even mention the European Union once in his remarks. 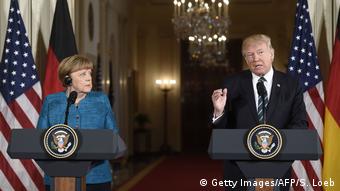 "Trump made no reference whatsoever to the European Union, either in general terms or, more pointedly, on the specific issue of trade relations," said Anderson. "The closest he came to acknowledging the EU was when he stated that the US would respect 'historic institutions,' but then added that there needed to be balance and fairness in the relationship to the US."

Trump's general rhetoric, for Anderson, was reminiscent "of a language more common of US administrations prior to 1989 - a language of bilateralism and ledger sheets, on which a balance of interest had to be maintained."

Again in an ostensibly joking manner, but with a tough and dark undertone, the US president praised German trade negotiators who according to Trump had done a better job than their American counterparts, insinuating again as he had done before that the trade relationship is unbalanced and unfair.

Merkel, meanwhile, "spoke from an entirely different - and actually much more grounded and accurate - perspective, answering in effect that the EU negotiates trade deals with member state input and that the principle of mutual benefit in EU trade deals is well established," said Anderson.

"So on trade, which had not been discussed at that point in the visit, the two leaders seemed to be speaking past one another, which will not be a reassuring message for Germany or for Europe," Anderson added.

Speaking past each other

That impression was shared by presidential rhetoric scholar Farnsworth.

"The news conference suggested that these two leaders have little in common, other than a desire to avoid exchanging harsh words in public," he said. "Mainly they talked past each other."

Having made some boilerplate statements about the importance of German-American ties, but really having spoken past one another on a substantial level may sound like a harsh verdict for a meeting between a German Chancellor and an American president.

But given Merkel and Trump's past and their very different political and personal backgrounds as well as the fact that this was their first ever face-to-face encounter, it may have been all that could have been reasonably expected at this point.