US presidential candidate Donald Trump doubles down on immigration

Billionaire real estate mogul Donald Trump has said undocumented immigrants "have to go." The Republican presidential hopeful says a hike in visa fees would fund a wall along the US-Mexico border. 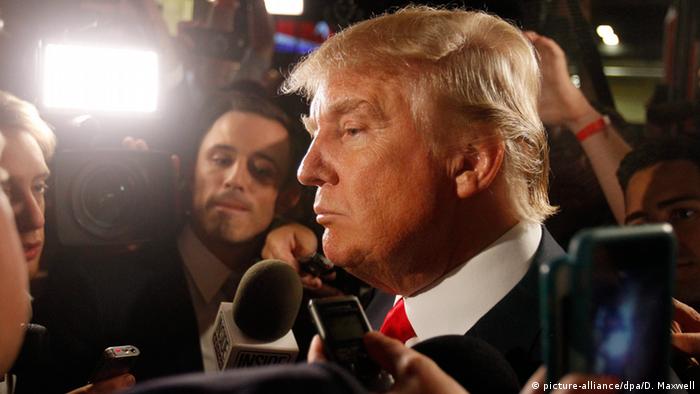 US presidential candidate Donald Trump unveiled his immigration platform Sunday, saying all undocument immigrants must be deported and called for an end to birthright citizenship in the United States.

"We have to come up with a whole new set of standards," Trump told NBC's "Meet the Press" television program. "Either we have a country or we don't have a country."

Trump's mother and two of his three spouses were immigrants, and his paternal grandparents were from Germany.

The billionaire reality TV star has called for building a wall along the US-Mexico border, though not along the US-Canada border, which is longer. Many commentators have called this discriminatory.

Hispanics, many of whom have Mexican roots, make up 16 percent of the US population and are a criticial vote for any presidential hopeful.

Nevertheless, Trump has been relentless in carving out an anti-immigrant platform, describing many Mexicans as "rapists" and "criminals." Though such statements have garnered plenty of criticism, he remains strongest in early polls of likely Republican Party voters.

Trump has said he would deport all undocumented migrants and rescind executive orders by US President Barack Obama that have postponed deportation for as many as 5 million people.

"I love this country and I want to make it great again," Trump said. "And it's not going to be great if we keep going the way we're going, we're going to be third world. We probably already are."

But, while Trump has been long on vitriol, he has been short on details. He evaded questions of what to do with immigrants who had nowhere to go.

"We'll work with them," he said, without elaborating. "It will work out so well. You'll be so happy," he continued. "In four years, you're going to be interviewing me and say, 'What a great job you've done, President Trump.'"

In a policy paper unveiled Sunday, Trump said he would increase fees on temporary visas for Mexican chief executives, diplomats and North American Free Trade Agreement workers if Mexico did not agree to pay for his proposed border wall.

Signed in 1994, NAFTA eliminated most tariffs on trade and investment between the United States, Canada and Mexico. It also permits the temporary cross-border movement of business travelers within the region.

Trump said he would also impound all remittance payments derived from illegal labor and increase fees at ports of entry from Mexico.

"The Mexican government has taken the United States to the cleaners," he said. "They are responsible for this problem, and they must help pay to clean it up."