US Olympics body may sanction athletes for Trump protests

Athletes are facing possible sanctions for protesting Donald Trump at the Pan American Games. Gwen Berry and Race Imboden tried to draw attention to social issues in the US that they feel are spiraling out of control. 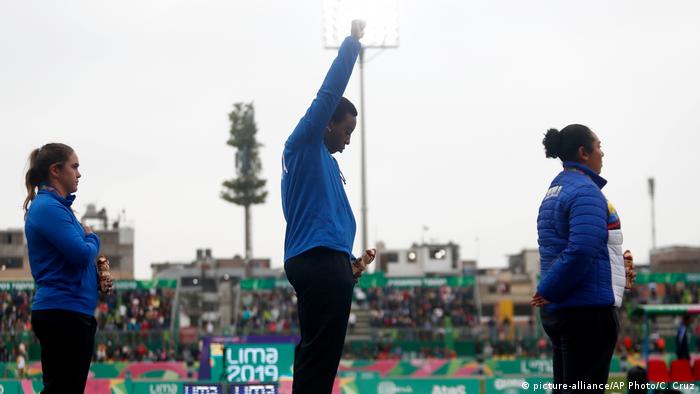 The United States Olympic and Paralympic Committee (USOPC) will evaluate consequences for athletes who protested President Donald Trump on the medal podium at the Pan American Games in Peru.
On Friday, fencer Race Imboden followed the example of quarterback former NFL quarterback Colin Kaepernick, kneeling as the United States celebrated gold in the team foil event.

"This week I am honored to represent Team USA at the Pan Am Games, taking home Gold and Bronze," Imboden wrote on Twitter. "My pride however has been cut short by the multiple shortcomings of the country I hold so dear to my heart. Racism, Gun Control, mistreatment of immigrants and a president who spreads hate are at the top of a long list."

In another protest of "extreme injustice" and "a president who's making it worse," Gwen Berry raised the Black Power fist as the US anthem closed her medal ceremony for women's hammer on Saturday. The salute recalled the joint protest by the US sprinters Tommie Smith and John Carlos at the 1968 Olympics in Mexico. "It's too important to not say something," Berry told national broadsheet USA Today. "Something has to be said."

Read more: Was the Karlsruhe football team punished by the Nazis?

Mark Jones, the USOPC's vice president of communications, said members of the governing body would consider what sanctions they might impose on Berry and Imboden, who could represent the US in front of a global audience at the 2020 Tokyo Olympics.

"Every athlete competing at the 2019 Pan American Games commits to terms of eligibility, including to refrain from demonstrations that are political in nature," Jones said in a statement released to ESPN. "In these cases, the athletes didn't adhere to the commitment they made to the organizing committee and the USOPC. We respect their rights to express their viewpoints, but we are disappointed that they chose not to honor their commitment."

Attending at the invitation of the organizers in Lima, Olympic athletics legend Carl Lewis also criticized Trump. "We have a president who is racist and a misogynist, who doesn't value anybody but himself," said Lewis, when asked to weigh in on the issue of gender equality and equal pay in sport.

"My mother was a pioneer," said Lewis, who won a total of 10 Olympic medals, nine of them gold, and — after turning 30 and adopting a vegan diet — set the world record in the 100 meters in 1991. "My parents were teachers and they taught us that everyone deserves the same opportunities," he added. "Of course I'm for it [equal pay] in athletics. We shouldn't even be talking about it."

Speaking to DW, Meredith Michaels-Beerbaum, one of the most successful women in show jumping, talks about being a pioneer in a male-dominated sport and why athletes should speak their mind when it comes to politics. (18.07.2019)

Hertha Berlin players and coaches "took a knee" before their game against Schalke. The gesture was in support of the protests of some NFL players during the US national anthem, which have irked Donald Trump. (14.10.2017)

It is one of the world's best-known stadiums and will be the venue for the DFB cup final on May 25. We take a look at the arena’s eventful history with a lineup of eleven pictures. (24.05.2019)