Hertha Berlin players and coaches "took a knee" before their game against Schalke. The gesture was in support of the protests of some NFL players during the US national anthem, which have irked Donald Trump. 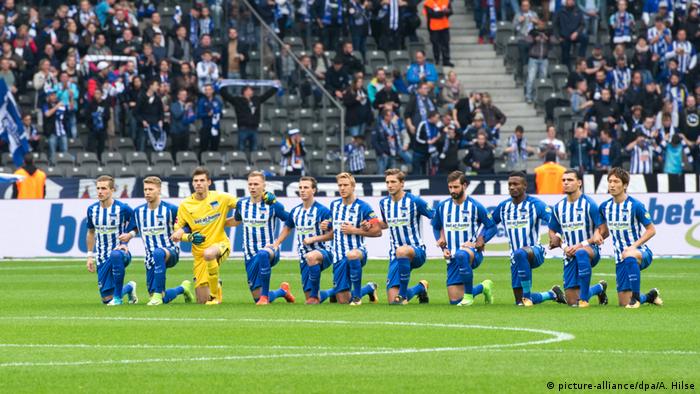 All 11 of Hertha Berlin's starting players kneeled with their arms linked near the center circle before their Bundesliga game against Schalke in Berlin's Olympic Stadium on Saturday. Hertha's subs and coaches also "took a knee" on the bench.

"Berlin is colorful," an Olympic Stadium announcer said before the game, which Hertha lost 2-0. "Hertha stands for diversity and is against violence. For this reason, we are joining with the protest of fellow American athletes to take a stand against discrimination."

"For a tolerant Berlin, now and forever," the announcer concluded.

Hertha said the gesture was in solidarity with the protest players of the National Football League (NFL) in the United States during the playing of the "Star Spangled Banner," the country's national anthem.

The protest, which former San Francisco 49ers quarterback Colin Kaepernick started in 2016, is against racism, and particularly police brutality against African Americans. US President Donald Trump has repeatedly criticized the protests as unpatriotic and disrespectful and called for the NFL to ban them. Advocates argue that they are exercising their right to free expression.

"We are no longer living in the 18th century but the 21st, but there are some people who are not ideologically there yet. If we can provide them with some extra tutoring, that's a good thing," Hertha defender Sebastian Langkamp told German broadcaster Sky during the halftime break of the game.

Read more:  NFL's Roger Goodell: 'We believe everyone should stand for the National Anthem'