US official apologizes to EU over disparaging remarks

US Assistant Secretary of State Victoria Nuland has apologized over derogatory comments made about the EU during a leaked phone conversation. The US has indicated Russia may have played a role in the leak. 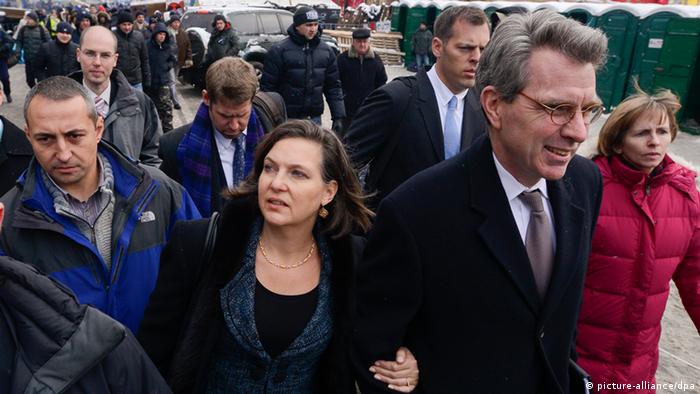 Nuland (pictured above) apologized on Friday for the comments allegedly made during a private phone conversation with US Ambassador to Ukraine Geoffrey Pyatt, the US State Department said.

In the recording, a female voice can be heard saying, "So that would be great, I think, to help glue this thing and have the UN help glue it, and, you know..." Then a graphic four-letter word was used when referring to the EU.

State Department spokeswoman Jen Psaki said Nuland "has been in contact with her EU counterparts and, of course, has apologized."

While declining to confirm the recording's contents, Psaki did not dispute its authenticity.

"I did not say it was not authentic," Psaki said.

Nuland, who was in Ukraine on Thursday, has been involved in US attempts to mediate between Ukraine's government and opposition since anti-government protests erupted in November.

The audio appears to show Nuland and Pyatt weighing in on the future makeup of Ukraine's government. They discuss the qualities of opposition leaders, including boxer-turned-politician Vitaly Kitschko, former Ukrainian economy minister Arseniy Yatsenyuk and far-right leader Oleh Tyahnybok.

"I think [Yatsenyuk] is the guy who's got the economic experience, the governing experience. What he needs is [Klitschko] and [Tyahnybok] on the outside. He needs to be talking to them four times a week."

US points the finger at Russia

While it remains unclear how the telephone conversation was recorded, US officials have indicated that Russia may have played a role.

"Certainly we think this is a new low in Russian tradecraft," Psaki said. "Obviously they were the first ones to post on Twitter about it, which is an indication."

Analysts suggest Russia could be seeking to bolster claims that Washington is manipulating the Ukrainian opposition, something Psaki denied.

"Absolutely not," she said. "It should be no surprise that US officials talk about issues around the world. Of course we do. That's what diplomats do."

The White House was more direct in pointing the finger at Russia.

"You know... the video was first noted and tweeted out by the Russian government. I think it says something about Russia's role," said White House spokesman Jay Carney.

The video, entitled "Marionettes of Maidan," was first posted on February 4 and is subtitled in Russian. It is believed to have been recorded in late January.

Maidan refers to the name of the main square in the Ukrainian capital of Kyiv, which has become the center of opposition protests, triggered by President Viktor Yanukovych's decision to pull out of a long-awaited free trade deal with the EU in favor of improving ties with Russia.

At least four people have been killed in clashes with security forces since protests turned violent last month.