US is committed to Middle East peace, says Rex Tillerson

US Secretary of State Rex Tillerson met with Syria's opposition members in Jordan. He called on Iran to withdraw its military from the Syrian conflict. 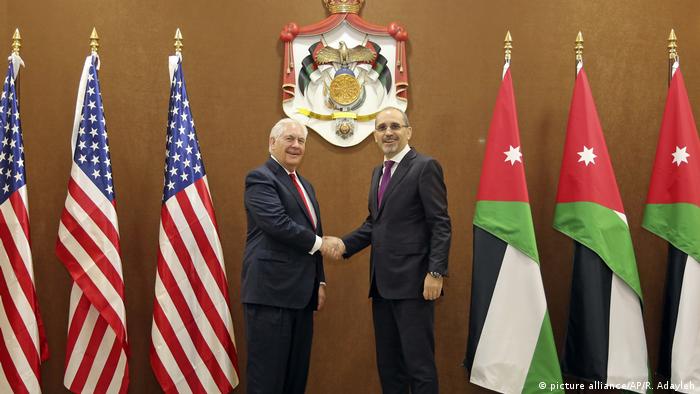 US Secretary of State, Rex Tillerson, traveled on Wednesday to Amman, Jordan, where he spoke with regional leaders about the war in Syria and the Middle East peace process. Tillerson also signed a memorandum of understanding that extends US foreign aid to Jordan for a period of five years.

Under the agreement, Amman would receive $1.3 billion (€1 billion) per year, which represents an increase of $275 million in Washington's annual aid package to Jordan. Jordanian Foreign Minister Ayman al-Safadi said the aid will help the kingdom "face its economic challenges and meet our developmental and defense needs."

On peace in the Middle East, Tillerson reaffirmed US commitment to peace in the region and said that the Trump administration has a "fairly well advanced" peace plan, which has been under development for a number of months.

The peace process, however, has not moved forward since US President Donald Trump declared Jerusalem the capital of Israel. Palestinians said the US announcement meant Washington could not be seen as a fair peace mediator.

During the visit to Amman, Tillerson also met with members of the Syrian opposition in closed-door talks. The meeting comes in the wake of Russian-sponsored Syria peace summit in Sochi, which the opposition and Kurdish groups had boycotted.

On Syria, Tillerson said he was "quite concerned" about a recent cross-border escalation between Iran and Israel on Syrian territory. The US top diplomat called for Iran to withdraw its military from the Syrian conflict.

"Iran's military presence in Syria was based on an invitation from the Syrian government," said Akbar Velayati, a top aide to Iran's supreme leader.

More than 340,000 people have died and millions have been displaced since Syria's civil war began in 2011.