The relief package was approved after a 219-212 vote, and will now go to the Senate. The money is aimed at galvanizing a still-faltering US economy. 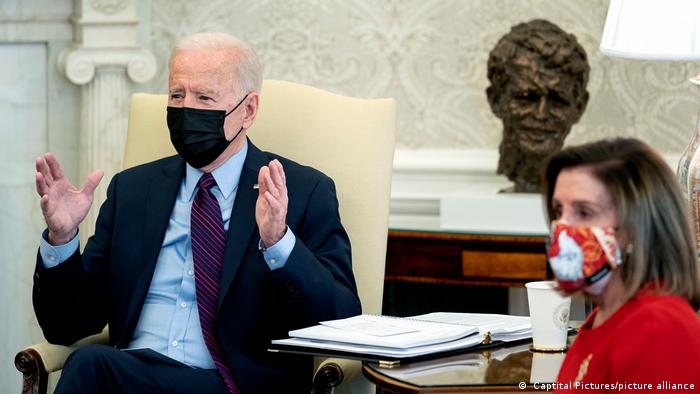 The US House of Representatives approved a $1.9 trillion (€1.57 trillion) coronavirus stimulus fund in the early hours of Saturday morning.

Lawmakers passed the bill — aimed at giving money to individuals, businesses, states and cities hit hard by the pandemic — on a narrow, near party-line vote of 219 to 212.

President Joe Biden has been pushing for the relief package, saying it will be used to stimulate the economy and create new jobs.

All Republican representatives voted against the bill, which will now go to the Senate, where many progressive Democrats are also keen on resuscitating a drive for an increase to the minimum wage.

Democrats have said the still-faltering economy and the more than 500,000 American lives lost to COVID-19 demanded quick, decisive action. GOP lawmakers, they said, were out of step with a public that polling shows largely views the bill favorably.

Republicans, meanwhile, have said the package is too expensive and will funnel funds into areas that are irrelevant to battling the pandemic, like labor unions and Democratic-run states they suggested didn't need money because their budgets had already recovered.

If approved by the Senate next week the relief fund will provide payments to private households, finance measures for coronavirus tests and vaccine distribution, as well as provide additional help for those out of work.

The bill directly provides $1,400 checks to most Americans. It would also extend unemployment benefits, set to expire in mid-March, by about six months, as well impose a moratorium on evictions for millions of people.

In reaction to the vote, the House Budget Committee tweeted: "The American Rescue Plan Act of 2021 will provide health care workers with the resources they need to vaccinate as many Americans as they can, as fast as they can."