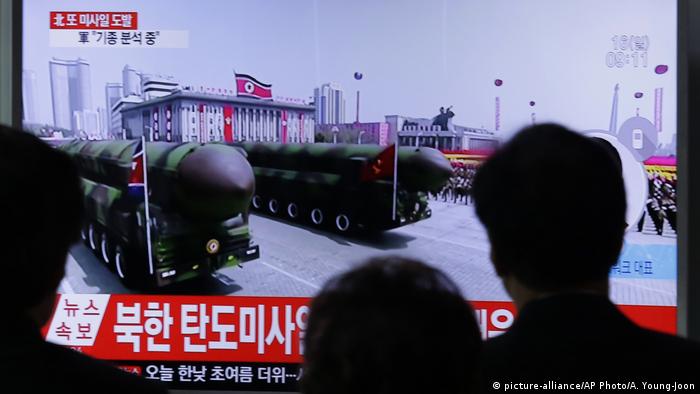 US lawmakers on Thursday voted almost unanimously in favor of imposing fresh sanctions on the North Korean regime as tensions continue to mount over its nuclear and ballistic missile programs.

The new legislation takes aim at Pyongyang's shipping industry and use of slave labor. Under the new bill, ships owned by North Korea or countries refusing comply with UN resolutions against it will be barred from sailing in US waters or docking at US ports.

Goods produced by the forced labor exported by the North will also be prohibited from entering the US. The bill also makes clear that anyone found using slave labor from North Korea would be subject to sanctions under the International Emergency Economic Powers Act.

According to Republican Ed Royce of California, a co-sponsor of the bill, countries including Senegal, Angola and Qatar import North Korean workers who send their salary back home, helping the pariah regime take in billions of dollars each year.

"This is money that (North Korean leader) Kim Jong-un uses to advance his nuclear and missile program, and also pay his generals, buying their loyalty to his brutal regime," Royce said. "That is what the high-level defectors that I meet with say. So let's squeeze his purse."

The bill also requires the administration of US President Donald Trump to decide whether to designate North Korea as a state sponsor of terrorism within the coming 90 days. Doing so would trigger further sanctions, including restriction on US foreign assistance, which is usually designated towards disaster relief.

The latest measures will now go to Senate to be ratified.

Thursday's vote in the House of Representatives conincded with US Secretary of State Rex Tillerson calling on Southeast Asian governments to do more to ensure a "leak-proof" enforcement of sanctions against Kim Jong Un's regime.

Briefing reporters on the back of Tillerson's first meeting with all members of the 10-nation Association of Southeast Asian Nations (ASEAN), Patrick Murphy, US deputy assistant secretary of state to east Asia, said: "We are communicating with all countries to implement the U.N. Security Council resolutions and, most importantly, deny North Korea the revenue streams it has used to advance its provocative programs."

Washington is also pushing ASEAN nations to prevent diplomats from the North from conducting business aimed at financing its weapons programs.

All ASEAN states have diplomatic relations with North Korea, while five even have embassies in Pyongyang.

According to Murphy, Washington was not seeking to encourage the ASEAN states to cut all diplomatic ties, but rather to examine were relations with North Korea "clearly exceed diplomatic needs."

Tillerson also reportedly sought to ease any fears among Asian leaders that Washington could waive its security and economic commitments to the region on the back of Trump's "America First" platform and the US' withdrawal from the Trans Pacific Partnership trade pact.

Murphy said Tillerson had stressed that the ASEAN region remained a "very important ... strategic partner" for the US. Trump, Murphy said, had demonstrated that commitment by agreeing to attend regional summits in the Philippines and Vietnam later this year.

Coronavirus: Germany announces tightening of restrictions until Christmas 10h ago