US has Secret CIA Prisons in Eastern Europe | Europe| News and current affairs from around the continent | DW | 03.11.2005

The EU will examine whether the CIA operates secret prisons, known as "black sites" for al Qaeda suspects in Eastern Europe and elsewhere around the world. 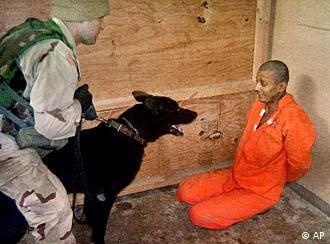 The US is under scrutiny for its interrogation methods

The EU Commision will review whether the CIA operates secret prisons in Eastern Europe, noting that such facilities would not comply with EU treaties, officials said Thursday.

The EU executive will "at technical...level find out what the truth is in these stories," said Friso Roscam Abbing, spokesman for security and justice affairs. "In that sense, we will check the accuracy of those reports..then further define our stance."

He added that such prisons would go against the EU human rights charter and the international convention against torture, which all 25 EU members are obligated to abide.

The Washington Post reported this week that the prisons are, or have been, located in eight countries including Thailand, Afghanistan and "several democracies in Eastern Europe" since the system was set up after the Sept. 11, 2001 attacks.

The names of the eastern European countries were withheld by the Post "at the request of senior US officials," who argued that the disclosure might disrupt counterterrorism efforts. Thailand denied there was a prison there.

Meanwhile, the Czech Republic, Slovakia, Bulgaria, Hungary have denied the presence of prisons. Poland refuses to comment and US-based NGO Human Rights Watch has pointed to Poland and Romania as the most likeliest sites. Both countries, of which only Poland is an EU member, have strong US ties and support the Iraq war. 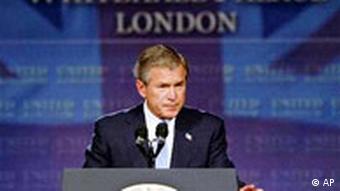 No confirmation, no denial

White House officials refused to confirm the presence of secret prisons around the world, including one in an unnamed Eastern European democracy -- but they didn't deny it either.

Instead, President George W. Bush's national security adviser, Stephen Hadley, said the United States will do what is necessary to fight and win the war on terrorism.

Hadley and White House spokesman Scott McClellan refused to confirm or deny the Post report. "I would say that the president's most important responsibility is to protect the American people," McClellan told reporters.

The refusal to discuss the matter was echoed by US Attorney General Alberto Gonzales and the Central Intelligence Agency. But former US president Jimmy Carter denounced what he said was "a profound and radical change in the basic policies or moral values of our country" in reaction to the report.

"This is just one indication of what has been done under this administration to change the policies that have persisted all the way through our history," said Carter, who championed human rights during his 1977-1981 term as president.

"Gulag of our times"

The existence of secret CIA detention centers has long been claimed. Amnesty International denounced an "archipelago" of prisons in June as a "gulag of our times."

But the report that eastern European countries were among the locations is new.

Czech Interior Minister Frantisek Bublan was quoted by the online news outlet Aktualne.cz as saying that the Czech Republic recently turned down a US request to set up a detention center on its territory.

"The negotiations took place around a month ago," he was quoted as saying. The Americans "made an effort to install something of the sort here, but they did not succeed."

Separately, Hungary's intelligence chief, Andras Toth, said Budapest had not been approached, telling AFP that "the mere suggestion of this is absurd."

The CIA has sent more than 100 suspects to the hidden global internment network, the Post said, indicating that the number was a rough estimate and did not include prisoners picked up from Iraq.

About 30 of the detainees, considered major terrorism suspects, have been held at "black sites" organized by the CIA in Eastern Europe and elsewhere, it said.

Locations in Thailand and at Guantanamo Bay, Cuba were closed in 2003 and 2004, the paper said. Another in Afghanistan known as the "Salt Pit" was moved inside Bagram Air Base.

Over 70 other detainees -- with less direct involvement in alleged terrorism and having limited intelligence value -- have been delivered to intelligence services in Egypt, Jordan, Morocco, Afghanistan and other countries, the daily added. 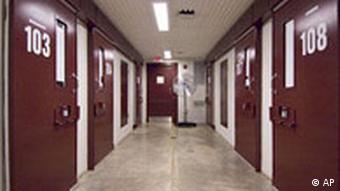 Isolation cells at the US prison in Guantanamo Bay, Cuba

The Post said virtually nothing is known about who is kept in the secret facilities, what interrogation methods are employed, or how decisions are made about whether they should be detained or for how long.

The covert prison system is "known only to a handful of officials in the United States and, usually, only to the president and a few top intelligence officers in each host country," it said.

The system has been increasingly debated within the CIA where some consider it unsustainable and a diversion from its main espionage mission, the report said.

The idea of holding suspects outside the US, where it is illegal to hold people in isolation and in secret prisons, was not under consideration before September 11, former government officials told the paper.

"The issue of detaining and interrogating people was never, ever discussed," said one former senior CIA intelligence officer. "It was against the culture and they believed information was best gleaned by other means."

Europe's biggest trial of a suspected al Qaeda cell ended this week with 18 of 24 defendants being convicted for collaborating with a terrorist group. But what sort of example has it set for similar cases in the future? (Sept. 30, 2005)

European countries have different ways of dealing with imams who preach hate. Following the attacks in London, some are vowing to crack down harder. (July 23, 2005)

British Prime Minister Tony Blair's government has defied heated criticism by publishing tough new anti-terrorism proposals, including the detention of suspects without charge for up to three months. (Oct. 13, 2005)