Britain Begins Battle Over Anti-Terror Laws | Europe| News and current affairs from around the continent | DW | 13.10.2005

British Prime Minister Tony Blair's government has defied heated criticism by publishing tough new anti-terrorism proposals, including the detention of suspects without charge for up to three months. 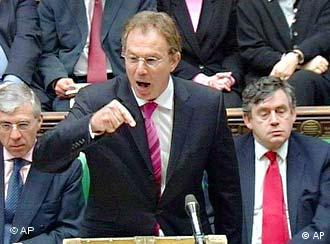 Blair defended the bill before lawmakers debate it Thursday

Blair said arguments made by the police for detaining suspects for 90 days instead of the current 14 were "absolutely compelling." 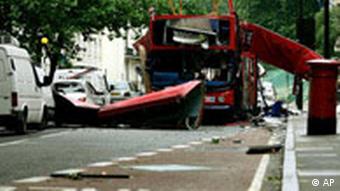 A front view of the bus which was destroyed by a bomb in London on July 7.

Drafted in the wake of the July 7 bombings in London, the legislation also calls for a ban on those who glorify terrorism, sell extremist books, receive or provide terrorist training, and prepare to commit attacks.

However, members of both the governing and opposition parties, human rights activists and Muslim leaders are mobilizing against many aspects of the bill, which they claim tramples on civil liberties and could even fuel the anger behind terrorism.

Even the government's own independent terror watchdog, Lord Alexander Carlile, warned that the extended detention period could be challenged in the courts under the Human Rights Act.

Among other concerns he expressed in a report on the bill, Carlile said a planned new offense of attending a terrorist training camp could lead to responsible journalists being prosecuted. 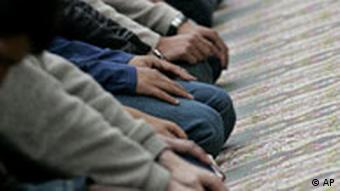 Many worry the new laws will alienate peaceful Muslims living in Britain.

"You don't prevent terrorism by abandoning age-old freedoms, you don't do it by alienating large groups of people who are law-abiding and sympathetic to the idea that we all ought to be able to live together," former Labour government minister Frank Dobson told the gathering.

Amnesty International, meanwhile, labeled the 90-day proposal "draconian" and the bill as a whole as "clumsy, dangerous and ill-conceived," handing a "victory" to the July bombers by crushing freedoms built over centuries.

But with weeks of tough debate over the bill due to begin formally on Thursday in the House of Commons, Blair was sticking to his guns on some of the most controversial proposals. 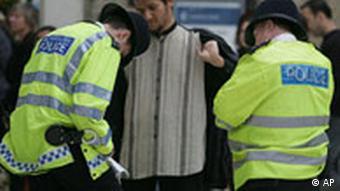 He invoked the London attacks on three subway trains and a bus that left 56 people dead, including the four presumed Islamist suicide bombers, in his case for the extended detention powers.

"What I have to do is to try to do my best to protect people in this country and to make sure that their safety and their civil liberty to life come first, and that is what I'm going to try to do," Blair told lawmakers.

Opinion: Helpless in the Face of Terrorism

The recent bombings, first in London and now in Egypt, and the killing of an innocent man by British police make it clear that we're increasingly helpless in the face of terrorism. (July 25, 2005)

A Month on, London Still in Grip of Terror

EU ministers vowed to unite in the fight against terrorism and committed themselves Wednesday, days after the London bombings, to implementing security laws agreed on a year ago after the Madrid attacks. (July 14, 2005)