The US debate commission has implemented a new rule ahead of the final presidential debate on Thursday. Each contender will be muted for two minutes at a time to allow their opponent to speak uninterrupted. 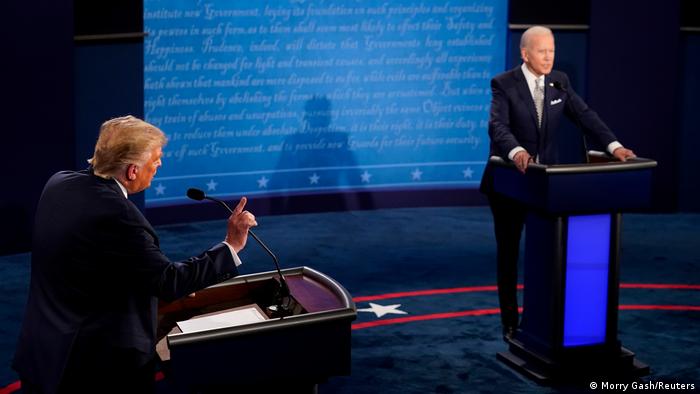 The US presidential debate commission has adopted a new rule three days before the final matchup between President Donald Trump and Democrat rival Joe Biden. The new rule should allow each candidate to complete their two-minute opening answers uninterrupted by temporarily muting their opponent's microphone.

Microphones will not be muted during the open discussion segments, but any interruptions by either candidate will count toward their time.

"We realize, after discussions with both campaigns, that neither campaign may be totally satisfied with the measures announced today. One may think they go too far, and one may think they do not go far enough. We are comfortable that these actions strike the right balance and that they are in the interest of the American people, for whom these debates are held," the nonpartisan Commission on Presidential Debates said in a statement on Monday.

Trump's campaign manager, Bill Stepien, confirmed that Trump would attend the final debate despite the changes. He said Trump "is committed to debating Joe Biden regardless of last-minute rule changes from the biased commission in their latest attempt to provide advantage to their favored candidate."

Controversy over voting rights in Georgia

Controversy over voting rights in Georgia

Hope for a more 'orderly' debate

The announcement comes three weeks after the chaotic first debate between the Republican and Democrat contenders which was marred by constant interruptions, often but not exclusively from Trump. Biden responded to Trump's interruptions with insults.

Afterward, the commission committed to ensuring "a more orderly discussion" for future debates.

Trump subsequently refused to show up to the second debate on October 15 after the debate commission changed the format to a virtual debate following the president's coronavirus diagnosis. "You sit behind a computer and do a debate — it's ridiculous, and then they cut you off whenever they want," Trump said in an October 8 interview with Fox Business.

Earlier on Monday, Trump's campaign said it was unhappy with the designated topics for Thursday's debate, arguing that it should focus more on foreign policy — the nominal focus of what was supposed to be the third debate.

"I will participate but it's very unfair that they changed the topics and it's very unfair that again we have an anchor who's totally biased," Trump told reporters aboard Air Force One. Biden's campaign said that both sides previously agreed to let moderators choose the subjects. It said Trump wanted to avoid discussing his management of the coronavirus pandemic.

The debate is divided into six segments — fighting COVID-19, American families, race in America, climate change, national security and leadership — and will last a total of 90 minutes. Each segment begins with a question, to which the candidates may now each respond for two minutes without interruption.

In Florida, where more than 2.5 million have already voted by mail, residents lined up on Monday for the first day of early in-person voting. A Reuters poll released last week showed Trump and Biden neck-and-neck in the state, a crucial battleground in recent years. More than 30 million Americans have already cast their ballots.

No winners in US presidential debate

No winners in US presidential debate

US debate organizers have canceled the second matchup between Joe Biden and Donald Trump after both sides disagreed on the format. Trump had refused to attend a virtual event, and plans to hold a live rally in Florida.

The debate commission has implemented a new rule ahead of the final presidential debate on Thursday. Each contender will be muted for two minutes at a time to allow their opponent to speak uninterrupted.

Trump and Biden spar from afar in separate town halls

Afghanistan appeals for aid committments despite COVID 1h ago