US cracks down Iran's uranium enrichment

The US has renewed most of its sanction waivers for the Iran nuclear program, but it has banned two key operations. It wants to stop Iran producing enriched uranium that could be used in weapons. 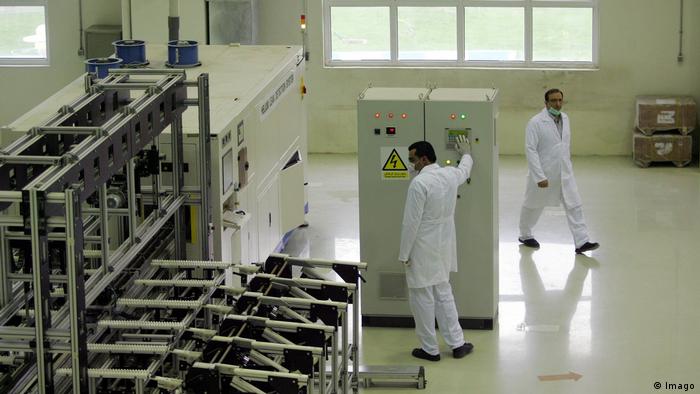 The US renewed most of its sanction waivers for the Iranian civilian nuclear program on Friday, but allowed two key waivers to lapse.

It will now start imposing sanctions on Iranian exports of enriched uranium that had been allowed under the nuclear deal controversially rejected by the Trump administration.

The five waivers that were extended were renewed for 90 days, permitting continued work at several Iranian nuclear sites. The 2015 Iran nuclear deal allowed Russia and several European nations to help maintain the facilities and convert them into exclusively civilian facilities.

Most of those activities will be allowed to continue, with stricter controls on one nuclear site. Works at the Arak, Fordow and Bushehr power plants and facilities can continue; however, the Bushehr site can no longer be expanded.

The two waivers that weren't extended relate to exports of enriched uranium and the storage of heavy water.

Under the deal, Iran was limited to holding 300 kilograms (661 pounds) of uranium enriched up to 3.67%, well below the threshold for building nuclear weapons. Any excess was to be sold on the international market in exchange for yellowcake uranium, mainly to Russia.

But, under the new policy announced by US Secretary of State Mike Pompeo on Friday, the US will now sanction anyone involved in trading natural or enriched uranium with Iran, and on Iran's storage of excess heavy water produced in the enrichment process.

However, it will still allow Iran to export scrap and spent nuclear fuel.

The change is meant to stop Iran from enriching any uranium.

"The Trump administration continues to hold the Iranian regime accountable for activities that threaten the region's stability and harm the Iranian people. This includes denying Iran any pathway to a nuclear weapon," State Department spokeswoman Morgan Ortagus said.

US President Donald Trump withdrew from the agreement a year ago, despite no signs Iran was violating the terms of the agreement. Since then, it has imposed a series of sanctions, particularly targeting its oil industry.

European powers, Russia and other nations continue to abide by the deal.

Iran is set to start producing new centrifuges for enriching uranium at its Natanz facility in a month's time. It said the move was not in violation of the 2015 nuclear deal European powers have been trying to salvage. (07.06.2018)