Iran has informed the UN that it plans to increase uranium enrichment within the limits of its 2015 deal with world powers. The decision comes as uncertainty about the future of the landmark nuclear deal grows. 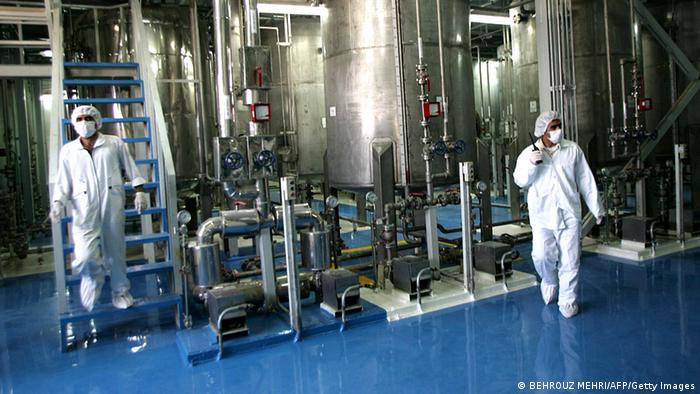 Behrouz Kamalvandi, the spokesman for the Atomic Energy Organization of Iran, was quoted by state media as saying that a letter detailing the decision to increase uranium enrichment had been submitted to the UN's International Atomic Energy Agency (IAEA).

Ali Akbar Salehi, the director of Iran's atomic program and one of the country's vice presidents, also confirmed that work had begun on advanced centrifuges at the Natanz facility.

Salehi said the latest nuclear activities would remain within the framework of the 2015 nuclear deal between Iran and global powers, and "do not mean the negotiations [with Europe] have failed."

"If conditions allow, maybe tomorrow night at Natanz, we can announce the opening of the center for production of new centrifuges" for uranium enrichment, Salehi said Tuesday, quoted by conservative news agency Fars.

The end of the JCPOA?

Observers have shown differing reactions to the announcement, and with it, the fate of the Joint Comprehensive Plan of Action (JCPOA), often referred to as the Iran nuclear deal, signed by China, France, Russia, the United Kingdom, the United States, Germany and the EU in 2015.

Maja Kocijancic, a spokeswoman for EU diplomatic chief Federica Mogherini, said that Iran's steps did not constitute a breach of the agreement, but added: "However, at this critical juncture, they will not contribute to build confidence in the nature of the Iranian nuclear program."

Israeli Prime Minister Benjamin Netanyahu, who claimed this week that Iran was clearly aiming "to create an arsenal of nuclear bombs" to destroy his country, addressed the fate of the JCPOA at a press conference with French President Emmanuel Macron in Paris Tuesday: "I didn't ask France to withdraw from the JCPOA because I think it is basically going to be dissolved by the weight of economic forces."

Macron used the opportunity to call on "everyone to stabilize the situation and not give into this escalation which would lead to only one thing: conflict."

A reaction to Trump's withdrawal?

In a speech on Monday, Supreme Leader Ayatollah Ali Khamenei vowed to preserve Iran's nuclear program despite growing pressure from the US.

In May, US President Donald Trump announced the US's withdrawal from the 2015 JCPOA, approved by his predecessor, Barack Obama. Apart from the US and Iran, the UK, Russia, France, China and Germany had also signed the accord.

Iran insists it has the option of resuming industrial-scale enrichment following the US exit from the deal.

French President Macron has been pushing for a new Iran nuclear deal through which the US and Europe could tackle Trump's concerns about Tehran's nuclear program and beyond. A new accord could also take into account Iran's ballistic missile program, and stop Tehran's activities in Syria and Yemen.

But the European Union believes the existing nuclear deal is effective and has largely curtailed Iran's nuclear activities.

The Israeli and German leaders may have stressed commonalities, but on Iran's nuclear potential they're miles apart. Benjamin Netanyahu even warned that Iran's activities could unleash a new wave of refugees to Europe. (04.06.2018)

As the US renews sanctions against Iran, officials from China, Russia, France, the UK and Germany met in the Austrian capital to discuss the nuclear accord. Iran says it wants to keep doing business with the world. (25.05.2018)

Iran lists tough conditions for Europe to save nuclear deal

Iran's supreme leader, Ayatollah Ali Khamenei, has given tough terms to Britain, France and Germany if they want to save the 2015 nuclear deal. Pledging not to seek new talks on Iran's ballistic missiles is one of them. (23.05.2018)