As the US renews sanctions against Iran, officials from China, Russia, France, the UK and Germany met in the Austrian capital to discuss the nuclear accord. Iran says it wants to keep doing business with the world. 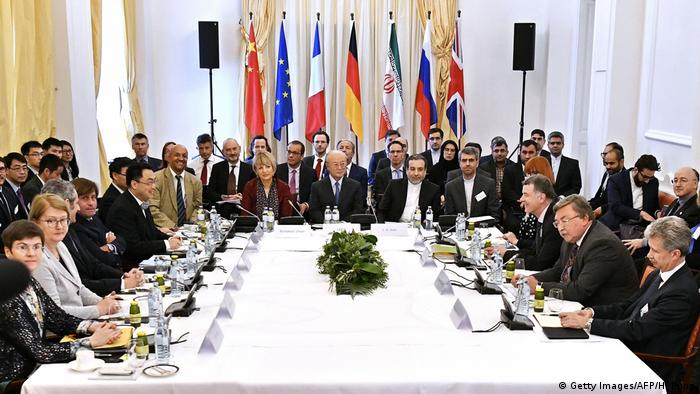 In the aftermath of the US withdrawal from the Joint Comprehensive Plan of Action (JCPOA), the Iran nuclear accord of 2015, the remaining signatories met for the first time on Friday in Vienna to try to save the deal.

China, Russia, France, the UK and Germany have expressed their commitment to maintain the JCPOA, but with new US promises to unveil "the strongest sanctions in history,"a solution has not yet been found on how to minimize the collateral damage that international business would face as a result of US sanctions.

Iranian leaders have also expressed their commitment to the deal and to abiding by strict curbs on their nuclear program, but only if the remaining powers are able to ensure that Iran can keep doing business with the world, despite US sanctions.

In Vienna, European powers agreed to present Iran with a plan to offset the fallout of US withdrawal from the deal and the renewed sanctions by May 31. Iranian deputy minister Abbas Arghchi said that Iran will then decide whether to stay or withdraw from the JCPOA, based on what the European powers propose.

"For the time being we are negotiating... to see if they can provide us with a package which can actually give Iran the benefits of sanctions-lifting and then the next step is to find guarantees for that package and we need both legal and political commitments by the remaining participants in the JCPOA (deal)," Araghchi told reporters.

"We got the sense that Europeans, Russia and China... are serious and they recognize that the JCPOA's survival depends on the interests of Iran being respected," Araghchi added.

The European Union has already launched legal mechanisms to shield European businesses with Iranian ties from US sanctions. The bloc is currently working on measures such as banning EU-based companies from complying with re-imposed US sanctions and urging governments to make money transfers to Iran's central bank to avoid fines.

Optimism after the talks

A senior Iranian official had expressed his country's worry prior to the meeting, saying that currently, the JCPOA "is in the intensive care unit, it's dying."

But Araghchi emerged from the talks expressing some optimism about the possibility that a solution could be found: "I am more confident than before the meeting," he told reporters.

Russian delegate Mikhail Ulyanov echoed Araghchi's tone. "We have all chances to succeed, provided that we have the political will."

Ulyanov commented on the US exit from the deal, affirming that the JCPOA was a "major international asset" that was not the property of the US, but instead "belongs to the whole international community."

Iran nuclear deal: Has Europe done enough to save it?

The recent parade of EU leaders to Washington to convince US President Donald Trump to keep the Iran deal may have been in vain. Some analysts say they should have been flying to Tehran instead. Teri Schultz reports. (08.05.2018)

Brexit: UK to restart trade talks with EU after threatening to quit 4m ago