The US has accused Russia of implementing a policy of repression on the Crimean peninsula and called for the occupation to end. But three years after the annexation of Crimea, signs of Russia's withdrawal remain elusive. 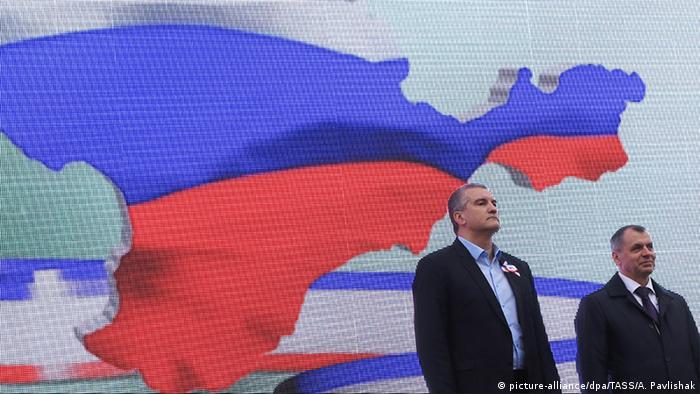 US State Department spokesperson Mark Toner on Thursday called on Russia to end the illegal occupation of the Crimean Peninsula three years after it seized the territory from Ukraine.

"We call on Russia to cease its attempts to suppress freedom of expression, peaceful assembly, association and religion," Toner said in an official statement, which accused Moscow of extrajudicial killings, enforced disappearances and repression on the peninsula.

"The United States again condemns the Russian occupation of Crimea and calls for its immediate end. Our Crimea-related sanctions will remain in place until Russia returns control of the peninsula to Ukraine," he added.

German Chancellor Angela Merkel, who is scheduled to travel to Russia to meet President Vladimir Putin in May, has also said sanctions would remain in place until Russia's stance on Crimea changes.

Toner's remarks complemented previous statement by Trump administration officials, including the US ambassador to the UN, Nikki Hailey, who has criticized Moscow for undermining Ukraine's territorial integrity.

Prior to his electoral victory, President Donald Trump said, "The people of Crimea, from what I've heard, would rather be with Russia than where they were."

On March 16, 2014, Moscow held an internationally condemned referendum in the wake of a Russian military intervention in the peninsula. The Kremlin recognized the results, saying voters overwhelmingly supported Crimea joining the Russian Federation.

Washington and the European Union, along with other allied countries, responded by imposing sanctions on Russian officials, companies and goods.

Following the annexation, NATO suspended the NATO-Russia Council, which led to the alliance's worst relations with Moscow since the Cold War.

However, two days after the referendum, Russian President Vladimir Putin delivered a speech to parliament requesting the creation of "two new constituent entities" for Crimea and Sevastopol.

"In people's hearts and minds, Crimea has always been an inseparable part of Russia," Putin said at the time. "This strategic territory should be part of a strong and stable sovereignty, which today can only be Russian."

Last year, Human Rights Watch said Crimea had witnessed a sharp increase in human rights violations, including the repression of the Tatar community. The human rights watchdog held Russia responsible for the increase in rights abuses.

The annexation of Crimea fomented unrest in eastern Ukraine, where pro-Russia separatists launched an armed insurgency.

Nearly 10,000 people have been killed and 23,000 injured in eastern Ukraine since the conflict erupted in 2014 in the wake of pro-Kremlin former President Viktor Yanukovych's ouster on the heels of pro-Europe protests in Kyiv.

Fighting in eastern Ukraine has prompted a humanitarian crisis, displacing nearly one million people and directly affecting over 500,000 children, according to UN figures.

The EU has vowed to continue sanctions until Crimea is handed back to Ukrainian authorities.

Ukraine has imposed a transport blockade on rebel-controlled territory after separatists seized industrial assets. Kyiv's decision marks a dangerous escalation as the conflict moves into its fourth year.