US Coast Guard to tackle China's 'illegal' fishing in Pacific

The US has decided to deploy its Coast Guard after accusing Beijing of foul play in the South China Sea, in waters Beijing sees as belonging to China. Tensions between the two nations have been growing in recent months. 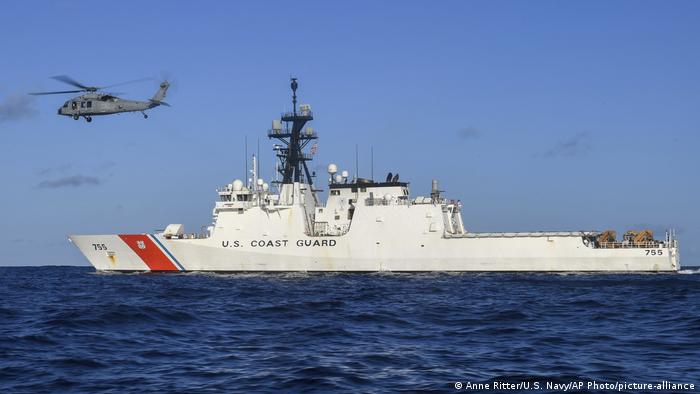 The United States has said it would deploy Coast Guard ships in the western Pacific for maritime security missions, citing illegal fishing and vessel harassment from China.

White House National Security Adviser Robert O'Brien said in a statement on Friday that the US Coast Guard "is strategically homeporting significantly enhanced Fast Response Cutters…in the western Pacific." The term "homeporting" refers to basing a ship permanently in a certain port.

The statement added that the US was a Pacific power and that China's "illegal, unreported and unregulated fishing, and harassment of vessels operating in the exclusive economic zones of other countries in the Indo-Pacific threatens our sovereignty, as well as the sovereignty of our Pacific neighbors and endangers regional stability."

O'Brien said the vessels will conduct maritime security operations, including protecting fishing boats, and enhanced maritime-domain awareness and enforcement efforts in collaboration with "regional partners who have limited offshore surveillance and enforcement capacity."

US accuses China of 'catalog of bad behavior'

The United States has repeatedly accused China of breaking international law by sending warships as escorts for Chinese fishing vessels into other countries' fishing waters. US Defense Secretary Mark Esper said in July that there has been a "catalog of bad behavior" in the South China Sea over the previous months and accused the Chinese military of several misdeeds, including the sinking a Vietnamese fishing boat.

In recent years, the US Navy has regularly conducted what it calls "freedom of navigation" operations close to some of the islands that China occupies that have been claimed by other nations. Beijing has responded with anger.

China claims nearly the entire South China Sea, which has been contested by several nations including Malaysia, Taiwan and Indonesia.

The announcement comes as US Secretary of State Mike Pompeo said the EU's top diplomat, Josep Borrell, had launched the first US-EU Dialogue on China on Friday.

"Glad to have this forum as a dedicated space to discuss the full range of the challenges Beijing poses to our mutual interests and values," Pompeo tweeted.

Pompeo met with his Asian peers earlier this month to discuss Chinese influence in the region. The US top diplomat has long been a harsh critic of China and its policies, especially as relations between the nations have soured due to the trade war and back-and-forth in the Pacific waters.