US Secretary of State Antony Blinken and his Chinese counterpart Wang Ji have held their first talks in months. The two discussed tension over Taiwan as well as Beijing's stance on the Russian invasion of Ukraine. 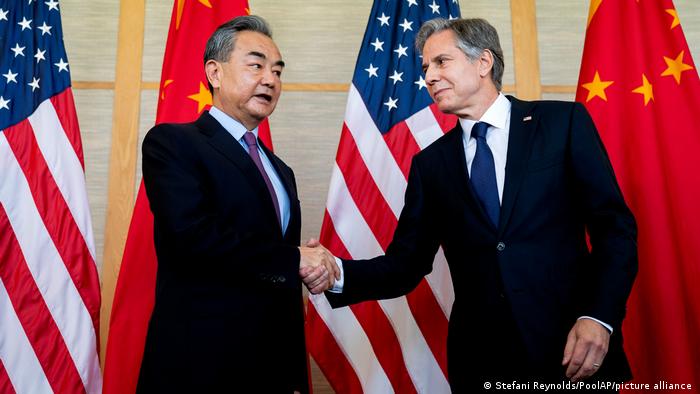 China's Foreign Minister Wang Yi and US Secretary of State Antony Blinken greet each other in Bali, Indonesia

United States Secretary of State Antony Blinken hailed the "constructive" hourslong talks with China's Foreign Minister Wang Yi on Indonesia's resort island of Bali on Saturday. Coming on the heels of a G20 summit, it was the first in-person talks directly between the two countries since October.

"Despite the complexities of our relationship, I can say with some confidence that our delegations found today's discussions useful, candid and constructive," Blinken said after the talks that lasted five hours.

"The relationship between the United States and China is highly consequential for our countries but also for the world. We are committed to managing this relationship — this competition — responsibly," he said.

The talks focused largely on preventing competition between the world's two largest economic powers from spilling over into open conflict. Blinken pledged that Washington would keep an open channel of diplomatic communication with Beijing.

"The two sides, on the basis of reciprocity and mutual benefit, reached a consensus to promote the Sino-US joint working group consultation to achieve more results," the Chinese foreign ministry said after the meeting.

Blinken said that the discussions had ranged from easing bilateral tensions, Beijing's stance on Taiwan and human rights, and concerns over Ukraine.

"I conveyed deep concerns of the United States regarding Beijing's increasingly provocative rhetoric and activity towards Taiwan and the vital importance of maintaining peace and stability across the Taiwan Strait," Blinken said.

He called on China to end its tacit support for Russia's invasion of Ukraine and to join the other G20 countries in formal condemnation of the war and of the Russian blockade of key Ukrainian agricultural products.

"This really is a moment where we all have to stand up, as we heard country after country in the G20 do, to condemn the aggression, to demand among other things that Russia allow access to food that is stuck in Ukraine," Blinken said. 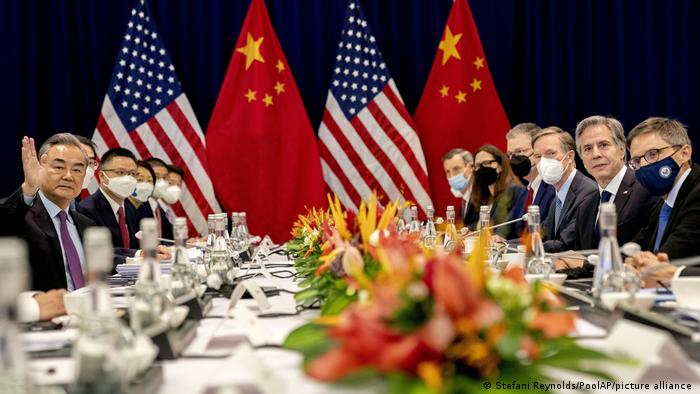 Leaders from China and the United States at a working lunch in Bali, Indonesia

The talks between the top diplomats followed a G20 summit where Blinken led efforts to pressure Russia over its war in Ukraine.

Blinken said Russia had come away from the meeting, hosted by Indonesia which said it was unwilling to suspend Russia altogether, feeling isolated and alone as most participants expressed opposition to the Ukraine war. He noted that his Russian counterpart Sergey Lavrov had left the talks early.

Shortly before Russia invaded Ukraine on February 24, Beijing and Moscow announced what they called a "no limits" partnership. While US officials say they have not seen China evade tough US-led sanctions on Russia or provide Moscow with military equipment, Beijing has also declined to condemn Russia's actions, for instance at the UN.

At the G20 meeting, Wang made a reference to Beijing's policy on global stability, saying "to place one's own security above the security of others and intensify military blocs will only split the international community and make oneself less secure."

Uncertainty in the region

Tensions remain high between the US and China, especially on the issue of Taiwan, the self-ruling democracy that China considers part of its territory. While Washington has repeatedly aired concerns over Beijing stepping up pressure on Taipei, China has referred to it as its internal affairs.

Li said the US must cease military "collusion" with Taiwan, adding that China has "no room for compromise" on issues affecting its "core interests," which include self-governing Taiwan.

The US and its allies have responded to Chinese claims over Taiwan and its expansionism in the South China Sea with what they call "freedom of navigation" patrols in the strategic waterway.