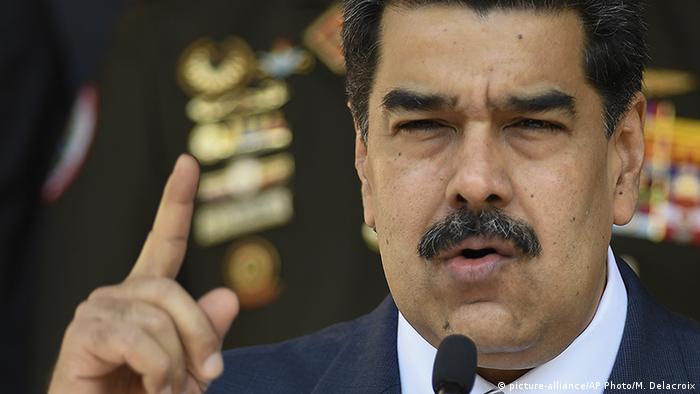 "While the Venezuelan people suffer, this cabal…lines their pockets," asserted US Attorney General William Barr. "It's time to call out this regime for what it is.”

Secretary of State Mike Pompeo said the US State Department would offer cash rewards of up to $15 million (€13.6 million) for President Nicolas Maduro, and up to $10 million each for arrests and convictions of four associates.

Geoffrey Berman, US attorney for the Southern District of New York, said Maduro and top lieutenants had run a "narco-terrorism partnership" with the Revolutionary Armed Forces of Colombia (FARC) — dissident leftist Colombian guerrillas — over "the past 20 years."

Pompeo accused Maduro and his associates of "facilitating shipments of narcotics from Venezuela, including control over planes that leave from a Venezuelan air base, as well as control of drug routes through the ports in Venezuela.''

Analysts said the moves could be bids to boost President Donald Trump's reelection prospects in the US "swing" state of Florida.

The unusual charging of a head of state marks an escalation in Washington's campaign to pressure Maduro to step down after his controversial reelection in 2018, followed by an economic meltdown afflicting Venezuelans.

Roberta Jacobson, who until 2018 served as the US State Department's top diplomat for Latin America, warned: "This action does nothing to help a negotiated settlement — something that's already really difficult."

She was apparently hinting at potential reactions from European and Latin American nations that the Trump administration could be overreacting.

For 15 months, a standoff has prevailed between Maduro, who has the support of Russia and China, and the US-backed Venezuelan opposition leader, Juan Guaido.

Maduro is supported by Venezuela's military and by China, Russia and Cuba.

The 57-year-old former bus driver has long accused the US "empire" of seeking excuses to take control of Venezuela's large oil reserves.

Displaced: Oil and Ruin - The Exodus of Venezuela