President Donald Trump has warned Megan Rapinoe not to "disrespect" the United States flag. The US captain has said ahead of the US's quarterfinal against France that she stands by almost every word of the statement. 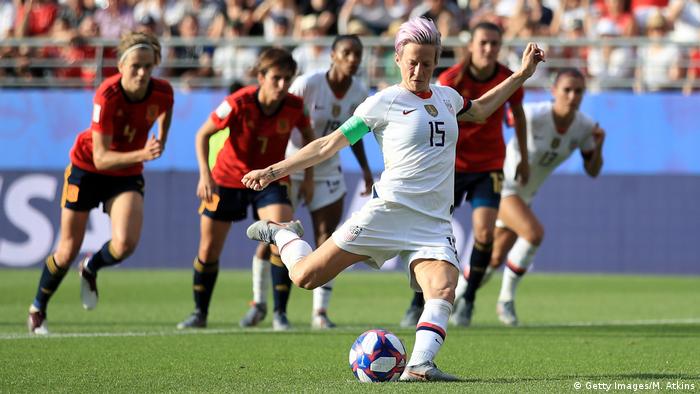 "I'm not going to the f****** White House," scoffed Megan Rapinoe when asked by an American soccer magazine whether she was excited about going to the White House after the FIFA Women's World Cup in France, where she is currently captaining the US team.

"I doubt we'll be invited," added the 33-year-old playmaker during a photo shoot for Eight By Eight, published on Tuesday evening.

Rapinoe said on Thursday's press conference ahead of the US' quarterfinal against France, that she had made the comments months ago and therefore wasn't worried about it affecting the dressing room.

The captain also said though, that she stood by the statement "with the exception of the expletive, my mom would not be happy with that." Rapinoe stressed that she doesn't want the platform the US women in the team have to be co-opted by an administration "that doesn't fight for the same things we fight for."

President Donald Trump responded to Rapinoe's comments by extending an invitation to the team as part of a typically robust Twitter response.

"We haven't yet invited Megan or the team, but I am now inviting the TEAM, win or lose," Trump tweeted on Wednesday. "I am a big fan of the American Team, and Women's Soccer, but Megan should WIN first before she TALKS! Finish the job!"

"Leagues and teams love coming to the White House," he added. "Megan should never disrespect our Country, the White House, or our Flag, especially since so much has been done for her & the team. Be proud of the Flag that you wear. The USA is doing GREAT!"

Rapinoe, who plays her club football for Seattle Reign FC in the National Women's Soccer League, is currently competing in her third World Cup, where the reigning champion US side have progressed to the quarterfinals — thanks in part to two penalties converted by Rapinoe against Spain in the last 16.

One of the biggest names in the women's game, Rapinoe has nevertheless made more headlines off the pitch in recent years, where she has developed a reputation as social activist. In September 2016, she became one of the first white female athletes to "take a knee" during the US national anthem, in support of American football player Colin Kaepernick's protest against police violence and racism.

She was subsequently dropped for six months, only returning to the national team once the US Soccer Federation (USSF) introduced regulations forcing players to stand at all times during the anthem. Since then, Rapinoe still refuses to sing the anthem and places her hands behind her back rather than over her heart.

- Read more: Women's World Cup: Germany must be wary of Sweden in the quarterfinals 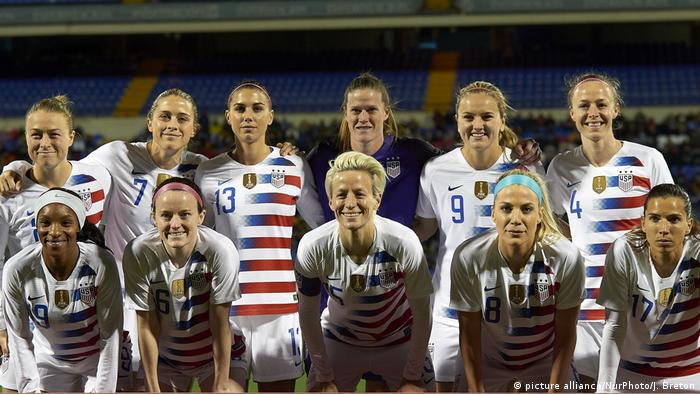 Megan Rapinoe, bottom center, is one of the biggest names in US soccer.

"I felt like it was the right thing for me to do, at the right time," she told British online outlet i ahead of the tournament. "Ultimately the positive thing was it got people talking about it. Understanding that while some Americans look at the flag and know that it protects all of them, some Americans don't feel that way, and that's something we need to address. Hopefully it's part of our evolution as a country."

Earlier this year, Rapinoe and 27 teammates initiated legal proceedings against the USSF over the issue of equal pay, accusing the federation of gender discrimination.

In September 2017, she and US teammate Alex Morgan became the first female players to sign up to Common Goal, a campaign launched by Manchester United midfielder Juan Mata that encourages players to donate 1% of their salaries to charity.

The US will face highly rated hosts France in Paris on Friday for a place in the semifinal.