Women's World Cup winners Megan Rapinoe and Alex Morgan have joined Juan Mata and Mats Hummels in pledging to donate 1 percent of their salaries to charity. They bring the project to the States and to the women's game. 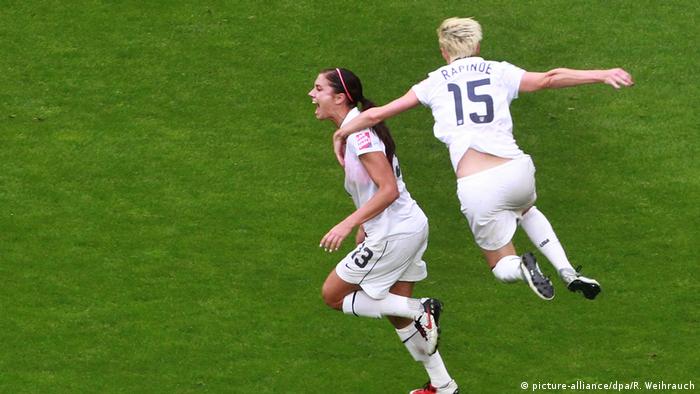 And then there were four. Megan Rapinoe and Alex Morgan are the latest players to commit to Manchester United and Spain international Juan Mata's "Common Goal" initiative.

Mata has appealed for fellow footballers to pledge 1 percent of their salaries to Common Goal, which supports football charities around the world.

"Because it takes a team to win a game," Rapinoe said on Twitter, sharing an image of the four prominent players to have made the pledge in the last couple of months - herself, Morgan, Mata, and Bayern Munich defender Mats Hummels.

Morgan, sharing the same Panini sticker-style image of the four participants, wrote: "This goal needs a team like no other."

Keen followers of Seattle Reign FC winger Rapinoe might have had an inkling of her support for the scheme back in August, when she chose to retweet Juan Mata's original video pledge calling on his fellow professionals to donate the symbolic sum from their often astronomical pay packets.

"A really happy day for all of us," the Manchester United playmaker concluded.

The Common Goal project points out that professional football's "wealth," "reach," and "cultural significance" is in a "league of its own" among professional sports nowadays.

"Imagine uniting the world of football behind a shared social vision," its homepage says. "Imagine the impact we could create and the lives we could change."

As the organization pointed out, the "team" it's building has some impressive credentials. All four inductees to date have World Cup winners' medals at home.