At the current meeting of the World Trade Organization, the top US trade representative has launched a broadside at the trade body's 164 members, saying they seek litigation instead of negotiations to obtain advantages. 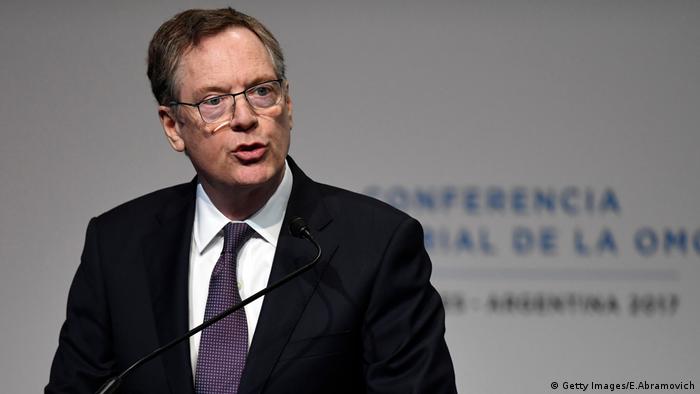 On the first day of the WTO ministerial conference in Buenos Aires, Robert Lighthizer said that members seemed to believe they could "gain concessions through lawsuits that they could never get at the negotiating table."

The top US trade representative also criticized special treatment given to some countries because of their allegedly dubious development status. "There is something wrong, in our view, when five of the six richest countries in the world presently claim developing country status," he said.

Lighthizer called for a clarification within WTO of development status saying the US couldn't "sustain a situation in which new rules can only apply to the few, and that others will be given a pass" - a reference to countries like China and India.

Lighthizer left Buenos Aires after his speech on Monday, WTO spokesman Keith Rockwell said — a move that had been anticipated at the conference held every two years and running until Wednesday.

The administration of US President Donald Trump has long made the WTO a preferred target of its "America First" policy, threatening to pull Washington out of the trade organization it says is hampering its ability to compete.

The US president has already withdrawn Washington from the Trans-Pacific Partnership (TPP) and insisted on renegotiating the North American Free Trade Agreement (NAFTA) with Mexico and Canada.

France meanwhile backed the call of the host, President Mauricio Macri of Argentina, that "WTO problems get fixed with more WTO - not with less WTO."

"France is attached to multilateralism. We don't want that framework to be called into question," said French minister Jean-Baptiste Lemoyne, though he acknowledged that "there are improvements to be made."

Several European and Latin American countries called for a more united and stronger WTO. German delegation chief Matthias Machnig said the organization's dispute settlement system should be bolstered to allow it to guarantee equal rights instead of favoring the strongest.

European Trade Commissioner Cecilia Malmstroem called for "pragmatism" and warned against blocking negotiations on agricultural subsidies and other issues.

The biggest challenge facing WTO, however, is Washington's refusal to appoint new judges to the organization's Appeals Body.

Under the WTO's arcane rules, the global trade body has seven appeals judges, three of whom sign off on each trade dispute appeal ruling. The current problem is that two of the seven judges have left in recent months and another has a term that expires in December, which will leave only four.

The United States has been blocking recruitment of new appeals judges for several months, exacerbating the risk that the WTO could effectively run out of judges, and piling pressure on other WTO members to accept US plans for reform.

France's Lemoyne expressed fears that the WTO's dispute settlement body would be paralyzed in a few months. But Lighthizer told the meeting that it was "impossible to negotiate new rules when many of the current ones are not being followed."

The US stance has cast doubt on the ability of the conference to produce a joint statement Wednesday. Conference chair Susana Malcorra described the meeting's result so far as a "glass" that was "practically empty." And the head of the German delegation Matthias Machnig told the news agency DPA that the best outcome the meeting could achieve was "concrete working programs for a string of issues such as fishing and e-trade."