US, British operatives in Libya ′not surprising,′ military expert says | World| Breaking news and perspectives from around the globe | DW | 31.03.2011

US, British operatives in Libya 'not surprising,' military expert says

News that the US and Britain have special operatives on the ground in Libya could become a source of irritation to NATO allies who maintain that the coalition forces are not to get directly involved in the conflict. 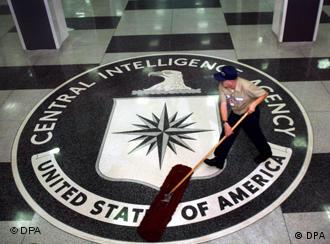 CIA agents and their British counterparts are reportedly in Libya

According to the New York Times, the US Central Intelligence Agency has inserted covert operatives into Libya to gather information to aid in NATO-led military airstrikes, and also to make contact with rebel leaders fighting against Moammar Gadhafi's forces.

In addition to the CIA presence, British officials said that "dozens" of special operatives and MI6 agents are working inside Libya to direct airstrikes from British jets and gather intelligence on military targets.

While clearly a gray area in terms of the scope of the UN resolution on Libya, Dave Hartwell, senior Middle East analyst with IHS Jane's, told Deutsche Welle that the news was not unexpected.

"The revelation that there are special forces on the ground is not surprising, in fact it would be surprising if we were to hear that there were not; in that case you could argue that the CIA wasn't doing its job properly," Hartwell said.

Reuters news agency reported that US President Barack Obama signed documents several weeks ago, authorizing the CIA to provide arms and other support to Libyan rebels, though the White House and CIA officials have declined to comment on the reports. 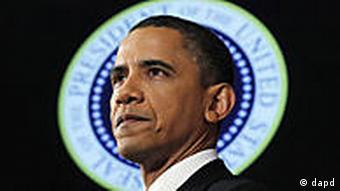 Obama's handling of the Libyan crisis has been criticized

The news has stoked criticism in the US over Obama's handling of the crisis. According to recent polls, about half of US public opinion is against US military involvement in Libya. The White House has maintained that no US troops will be used in a potential ground offensive in Libya, but the reports about CIA involvement on the ground are raising fears that it is just a first step that could eventually lead to US soldiers becoming embroiled in messy street battles.

In Britain, a public weary from military engagement in Iraq and Afghanistan likewise has no desire to see troops on the ground in Libya, although Hartwell says that there is an understanding that special forces are different.

"I don't see it as a matter of one following the other," he said. "In fact, you could use the argument that intelligence and special forces have been deployed so that the coalition will NOT have to put troops on the ground."

The UN Security Council Resolution and the mandate that NATO allies have together with the Arab League states that "all necessary measures" may be used to protect Libyan civilians. This does not rule out the presence of a ground force. At the same time, now that NATO has assumed full control of current operations in Libya, it's likely that some feathers will be ruffled. Coalition forces are not meant to get directly involved in the conflict, rather they are meant to be assisting NATO in the stated goal of protecting civilians.

But any irritation is likely to be kept well under wraps, says the Jane's expert.

"I think there will be a lot of diplomacy to avoid the appearance of any split in public," said Hartwell. "There was a struggle to gain unanimity, and now that the coalition partners have got that with NATO running the campaign, they will want to keep the Arab states on board, and will certainly tread very carefully."

"At the same time, it's an issue that is not going to go away, because the longer the opposition continues to be weak on the ground, the issue of how we safeguard them is going to remain." 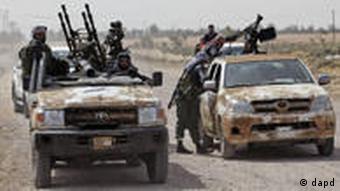 Whether to arm the rebels or not remains a thorny issue

That, of course, raises the thorny issue of whether or not to supply the Libyan opposition forces with weapons. Publicly, the US, like many other coalition partners, continues to debate the arms issue. On Wednesday, Jay Carney, the White House press secretary, released a statement saying that no decision had yet been made on arms provision.

"We're not ruling it out or ruling it in," Carney said.

Diplomatic efforts are being focused on learning more about the opposition's make-up. Experts agree that not much is known about the rebel leaders. NATO Supreme Commander James Stavridis said recently that there were "flickers" in intelligence reports of potential al-Qaeda and Hezbollah elements. In order to avoid embarrassment further down the line, the coalition governments need guarantees about who they are dealing with before handing over weapons.

NATO Secretary General Anders Fogh Rasmussen, however, said he doesn't believe the UN resolution will allow the coalition to provide arms to the rebels.

"We are there to protect the Libyan people, not to arm the Libyan people," Rasmussen told reporters. "As far as NATO is concerned, and I speak on behalf of NATO, we will focus on the enforcement of the arms embargo."

Depending on how the conflict unfolds, the question of whether or not to arm the opposition represents another potential stumbling block, said Hartwell.

"It depends on whether the Americans go through with (arms deliveries), and it depends on the situation on the ground," he said. "If the military situation deteriorates, there may well come a point when the opposition calls in a favor and tells the coalition to put its money where its mouth is. However, if the airstrikes prove effective at weakening Gadhafi's military machine, then there won't be a need to arm the opposition."

In his speech to America, President Obama successfully justified the intervention in Libya and fended off domestic criticism. He made clear that the coalition acted to stop a massacre, argues DW's Christina Bergmann. (29.03.2011)

For the first time in post-war history, Germany has publicly taken a position contrary to virtually all of its major allies. The fallout of Berlin’s abstention from coalition operations in Libya could be far reaching. (25.03.2011)