US brings back death penalty for federal inmates

The US government will execute its first federal inmate in nearly two decades before the end of the year. Attorney General William Barr said the decision was meant to uphold "the rule of law." 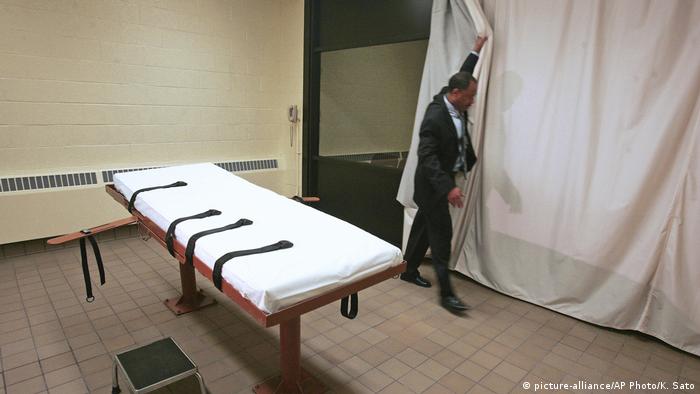 The US government has said it will resume the use of capital punishment, after the Justice Department moved to reinstate the practice at the federal level on Thursday.

President Donald Trump has long been a proponent of the death penalty, which is also supported by six in 10 Americans, though support has declined since the 1990s. The last time a federal inmate was executed was in 2003.

"The Justice Department upholds the rule of law — and we owe it to the victims and their families to carry forward the sentence imposed by our justice system," said Attorney General William Barr, as he announced the decision.

Capital punishment has been abolished in Europe, but it is still considered constitutional in the US. The Supreme Court struck the death penalty down in 1972 on technicalities, but since then some states have gradually made changes to state laws to restore it. Today, each state can make its own decision on the matter.

At the federal level, the death penalty has been legal since it was reinstated in 1988, but the government has rarely applied it.

Only three defendants were executed between 1988 and 2003, when the government unofficially suspended the death penalty due to litigation challenges over the drugs used in lethal injections.

The Justice Department was conducting a broad review of capital punishment and issues surrounding lethal injection drugs, which was commissioned by former President Barack Obama in 2014.

Barr said Thursday that the review had concluded, clearing the way for executions to resume with a new procedure for lethal injections involving a single drug, as opposed to the previous three-drug cocktail.

As a result, the government now plans to execute five inmates from the 60 that are currently on federal death row.

"The federal government should be leading the effort to end this brutal and often cruel punishment, not advocating for its return. It's time we evolve and put this terrible practice behind us," she said in a statement.

The first federal death row inmate scheduled for execution is Daniel Lewis Lee, a white supremacist convicted of murdering a family of three, including an 8-year-old girl.

Lee's execution is set to take place on December 9. Lee's attorney, Morris Moon, has said "executing him would be a grave injustice" and urged the government to reconsider.

Read more: Is the UK no longer opposed to the death penalty?

"Given the problems that undermine the fairness and reliability of Danny Lee's conviction and death sentence, the government should not move forward with his execution," he said.

The attorney stressed that the trial judge, lead prosecutor and family members of the victims all opposed Lee's execution.

But the Justice Department said the individuals selected for execution had all "exhausted their appellate and post-conviction remedies."

Amnesty International's annual death penalty report finds that executions have decreased worldwide. The trend is overshadowed by a new law in Brunei that allows authorities to kill people for homosexual activities. (10.04.2019)

The verdicts take the number of French citizens who have been found guilty of joining Islamic State to 11. Legal experts have said the rulings leave an "indelible stain" on the presidency of Emmanuel Macron. (03.06.2019)

Greece and Turkey hold first crisis talks since 2016 32m ago