US B-1 bombers overfly Korean Peninsula after North's ICBM test

Two B-1 US air force bombers have flown over South Korea in a show of force after North Korea's latest ballistic missile tests. Meanwhile, US President Trump slammed China for "doing nothing" to rein in Pyongyang. 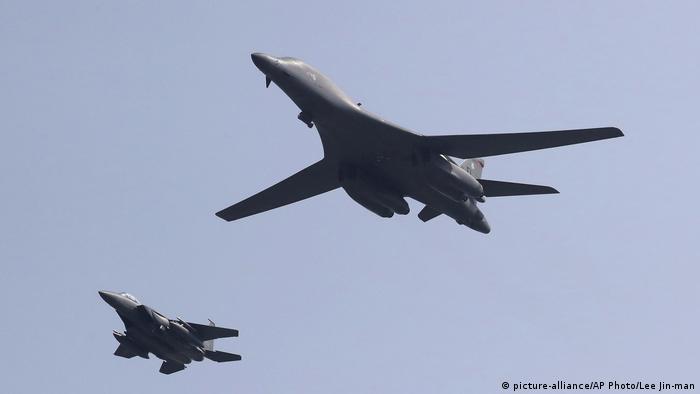 The B-1 bombers were escorted by South Korean fighter jets during a 10-hour mission on Saturday. The US Pacific Air Force said in a statement that the aircraft returned to the Andersen base in Guam after performing the act.

- North Korea's war of words with the world

"Diplomacy remains the lead; however, we have a responsibility to our allies and our nation to showcase our unwavering commitment while planning for the worst-case scenario," General Terrence O'Shaughnessy, commander of the US Pacific Air Force, said.

"If called upon, we are ready to respond with rapid, lethal, and overwhelming force at a time and place of our choosing," O'Shaughnessy added.

"North Korea remains the most urgent threat to regional stability."

Read: Which US cities could North Korea's ballistic missile hit?

But US President Donald Trump is unsatisfied with China's efforts to rein in its communist ally.

Trump said he would not allow Beijing to "do nothing" on North Korea.

"I am very disappointed in China. Our foolish past leaders have allowed them to make hundreds of billions of dollars a year in trade, yet they do nothing for us with North Korea, just talk," Trump wrote on Twitter.

"We will no longer allow this to continue. China could easily solve this problem," Trump said.

US to ban Americans from visiting North Korea

The US has authorized a ban on its citizens traveling to North Korea for tourism purposes. The ban will be officially published next week and take effect 30 days later. (21.07.2017)