The United States, South Korea and Japan have vowed to stand together against North Korea's weapons programs. President Joe Biden is taking a different approach towards Pyongyang than his predecessor, Donald Trump. 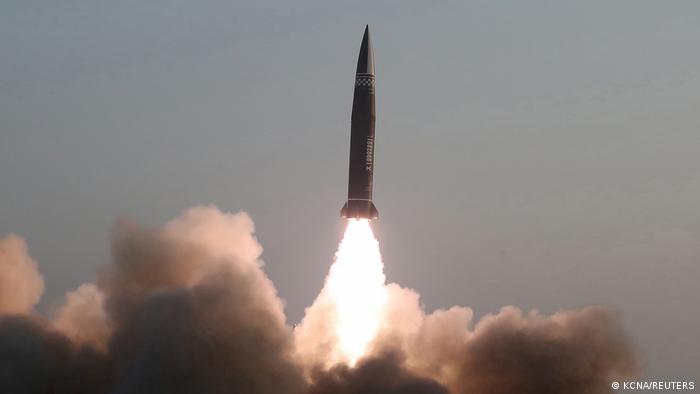 Officials from the United States, South Korea and Japan urged North Korea on Friday to curtail its controversial nuclear and missile programs, following an in-person meeting in Annapolis, Maryland.

US President Joe Biden's National Security adviser Jake Sullivan consulted with his counterparts from South Korea and Japan, Suh Hoon and Shigeru Kitamura, after recent threats from Pyongyang towards the new US administration.

In a joint statement, the three "shared their concerns about North Korea's nuclear and ballistic missile programs," vowing "concerted trilateral cooperation towards denuclearization."

The Biden administration will soon complete a review of US foreign policy towards North Korea. Biden has previously chided North Korea for its missile launches, but has also said he is willing to use diplomacy as needed towards Pyongyang.

How has US policy towards North Korea changed since Trump?

Biden's stance towards North Korea is a U-turn from that of his predecessor, former President Donald Trump. Although there was hostility between Trump and North Korean leader Kim Jong Un at the beginning of his term, Trump later said he "fell in love" with the dictator.

Trump downplayed North Korea's missile tests during his presidency, and sought a nuclear deal with Pyongyang to cement his foreign policy legacy. The Trump administration hoped that North Korea would pursue a path to denuclearization in exchange for the lifting of the US sanctions that were crippling its economy.

Trump met Kim for summits in Singapore in June 2018 and in Vietnam in February 2019, but the two leaders were unable to close on a deal. In October 2019, North Korean officials walked away from the negotiating table during talks with American diplomats in Sweden, due to their frustration with US sanctions.

Biden promised a different approach during the 2020 election campaign, saying he would not meet with Kim without preconditions. Biden had previously labeled Kim a "thug," while North Korea has called Biden a "rabid dog."