Moon Jae-in called on the US president-elect to continue talks with North Korea. Talks between Trump and Kim Jong Un stalled earlier over sanctions and limited progress on the North's nuclear program. 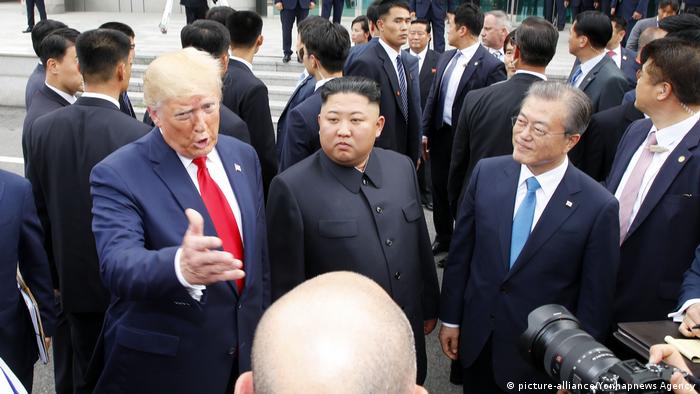 Trump, Moon and Kim met in the truce village of Panmunjom in the Demilitarized Zone separating the two Koreas in 2019

South Korean President Moon Jae-in on Monday urged US President-elect Joe Biden to hold talks with North Korea to build on the progress that President Donald Trump made with Kim Jong Un.

"The start of the Biden administration provides a new opportunity to start over talks between North Korea and the United States and also between South and North Korea,'' which have stalled amid the stalemate in nuclear negotiations, Moon said.

"The dialogues can pick up the pace if we restart from the Singapore declaration and seek concrete measures in the negotiations."

Biden takes office on Wednesday amid a prolonged stalemate in negotiations with Pyongyang, aimed at dismantling North Korea's nuclear and missile programs in exchange for US sanctions relief.

Moon earlier lobbied to help set up Trump's three summits with Kim, but their diplomacy was hampered over continued sanctions and little progress on reining in the North's nuclear program.

Biden has accused Trump of pursuing summits, rather than meaningful curbs on North Korea's nuclear capabilities. The country has a history of staging weapons tests and other provocations to test new US presidents, and Kim had vowed to strengthen his nuclear weapons program in recent political speeches that were seen as aimed at pressuring the incoming Biden administration.

Moon, 67, is the son of northern war refugees and is considered comparatively moderate in his stance towards the North by South Korean standards. He had previously offered to be a mediator between Pyongyang and Washington and on Monday said that he would seek an early chance to promote the North as Biden's foreign policy priority — aiming to follow up on an agreement reached by Trump and Kim at their first summit in Singapore.

Trump and Kim had pledged to establish new relations and work toward total denuclearization of the Korean Peninsula in the joint statement, but talks stalled at their second summit.

Moon said the issue of joint South Korea-US military drills could be discussed by reviving an inter-Korean military panel.

The erosion in inter-Korean relations has been seen as major setback to Moon, who met Kim three times in 2018.

Moon also called for a diplomatic solution with Japan to prevent the planned sale of Japanese corporate assets to compensate victims of forced labor, saying it would be "undesirable" for bilateral relations.

The two countries are at odds over legacies from Japan's 1910-45 colonial rule, and some former laborers have secured a court order to seize domestic properties of Japanese firms.