US aims to punish UN peacekeepers responsible for abuses 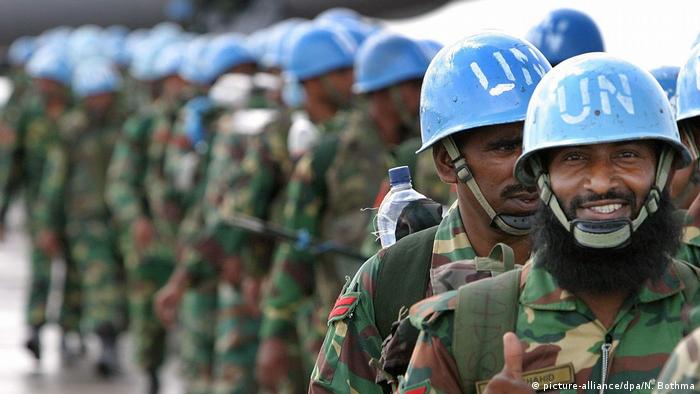 The United States is pushing the Security Council to toughen UN action against peacekeepers who abuse or fail to protect civilians, US Ambassador Nikki Haley said Wednesday.

"Even worse than failures to protect are instances in which civilians have been attacked, abused, and exploited by the peacekeepers who are supposed to protect them," Haley said during a Council debate on peacekeeping.

According to the draft text, peacekeepers could be sent home, replaced or not paid if they are involved in misconduct. Among other measures, the draft resolution mandates reporting of "performance failures," fosters "accountability measures for failures of performance and concrete incentives for stronger performance," and advocates "the role of data in improving troop performance," she said.

The UN deploys 96,000 peacekeepers who serve in 14 missions worldwide. The US has sought to cut the annual peacekeeping budget of $6.9 billion (€5.9 billion), of which it funds 25 percent.

Russia and China were cool on the US draft resolution, saying that the views of countries that contribute peacekeepers should be taken into account.

Russian Ambassador Vassily Nebenzia said the council should not be involved in "micro-management" and peacekeeping missions should have "very clear mandates with emphasis on the political settlement."

Instead of a binding resolution, he said Russia would support a political statement on improved performance instead of penalizing troop-contributing countries.

Bangladesh, which contributes the second most troops to peacekeeping operations, pointed out that performance is "inextricably linked" to peacekeeping missions having sufficient resources and personnel.

It cautioned that "using alleged performance failures as grounds for cost-cutting and force reduction may help score political gains, but hardly responds to the interest of those peacekeeping missions are mandated to serve."

Pakistan, another top troop contributor, said peacekeeping missions lacked adequate resources and were burdened with too many tasks.

UN Secretary-General Antonio Guterres has already taken action to respond to allegations of blue helmet misconduct, including a victims' advocate to help those victims of sexual violence.

"Much work remains to be done, but we are beginning to see the effects of our collective efforts," he said.

The struggle to involve women in the peacekeeping process

Germany is taking over the leadership of an international network which aims to better represent women in the field of conflict-resolution. But turning talk into action is no easy task. (09.04.2018)

'Faith in peacekeeping is being undermined'

UN peacekeepers have again been accused of sexually abusing people they are assigned to protect. The global campaign Code Blue is seeking an end to impunity for UN personnel — but re-establishing trust will take time. (29.03.2018)