Haiti, the UN and the unintended effects of a peace mission | Americas| North and South American news impacting on Europe | DW | 15.10.2017

Haiti, the UN and the unintended effects of a peace mission

After 13 years, the United Nations is ending its stabilization mission in Haiti. But as the last UN soldiers leave the Caribbean island, many issues remain unresolved — for both Haiti and the UN. 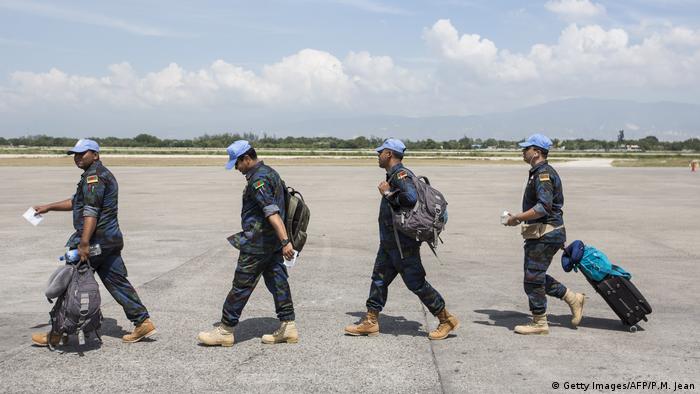 When Anne Lange traveled to Haiti for the first time, she was already well-acquainted with several Latin American countries. Nonetheless, she was shocked by the situation in this Caribbean state. "Haiti was an absolutely broken country — even compared with other countries in the region," she says. "The majority of the population are literally fighting just to survive, the state institutions don't function, and the land itself, the actual soil, is completely exhausted from decades of monoculture.”

Lange is a political scientist at the University of Potsdam. She traveled around Haiti in late 2014 and the spring of 2015 doing fieldwork for her PhD on decision processes involving UN institutions and international players. At the time, the UN Stabilization Mission in Haiti (MINUSTAH) had already been running for more than ten years. No significant progress has been reported since then. On the contrary: The country's development suffered another major setback in 2016 with Hurricane Matthew.

Now the UN's mandate is running out: The last of the UN soldiers leave the country on October 15. And there are plenty of people who think this is a good thing.

In early 2004, following the coup against President Jean-Bertrand Aristide, Haiti was in danger of sinking into chaos. Prompted by the United States, which feared an exodus to the north, the United Nations Security Council sent 6,700 "blue helmet" peacekeepers, 1,600 police officers and another 1,700 civilian aid workers and diplomats to support the transitional government, secure peace and organize fresh elections.

However, in spite of this large contingent — or perhaps even because of it — MINUSTAH ran into difficulties right from the start. There was little support for the mission among Haitians themselves. "Since its establishment in June 2004, MINUSTAH's presence in Haiti has at times been problematic, even divisive," Jorge Heine and Andrew S. Thompson write in their introduction to the book "Fixing Haiti." The Canadian political scientist Nicolas Lemay-Hebert from the University of Birmingham in the UK has also commented that "the mission [was] seen as yet another foreign 'occupation' in Haiti.” 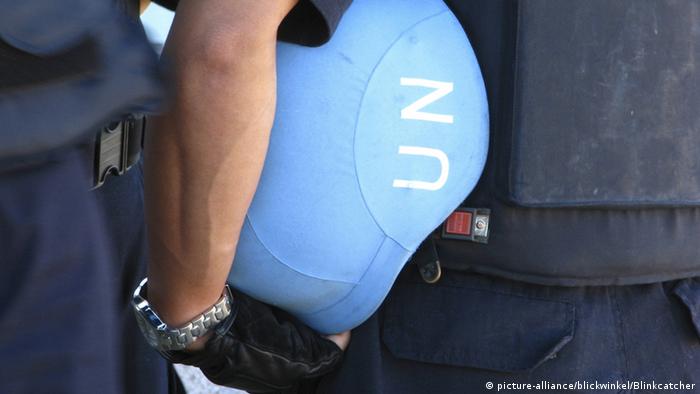 If, at first, this was more a case of instinctive resentment, opponents of the mission soon found concrete reasons to question its legitimacy. One of the first negative incidents took place a few months after the mission began, in the infamous slum Cite Soleil on the outskirts of the capital Port-au-Prince. UN peacekeepers under Brazilian command were described as having conducted a violent crackdown not only against criminal gangs but also against supporters of the deposed president, as well as others who were entirely uninvolved with either group. "This incident is still in the forefront of people's minds today when Haitians criticize the UN," the political scientist Anna Lange wrote in her report based on the interviews she conducted in the field.

A series of attacks took place over the course of the mission, further feeding the mistrust. UN soldiers were proven to have raped local people on numerous occasions, and to have taken part in the sexual abuse and prostitution of minors. The Canadian Lemay-Hebert wrote that "there was an amplification factor at work with each scandal, building on the narrative of occupation in Haiti and the latent hostility toward international troops in certain segments of the society." 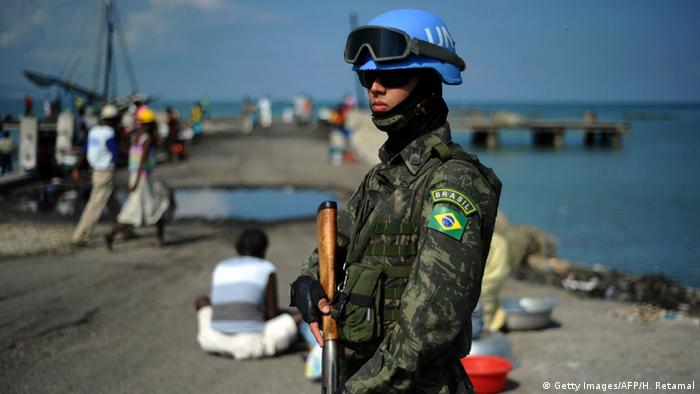 In 2010, the worst-case scenario came to pass. The mission's mandate had been due to come to an end, but following the devastating earthquake in January the UN extended it again, even increasing its presence there. Then, in October, a cholera epidemic broke out. At least 600,000 people fell sick, and between 8,000 and 10,000 died.

Soon after the start of the outbreak, suspicions were already being voiced that the pathogen had originated in a camp of Nepalese peacekeepers. One year later, a UN commission confirmed these suspicions, while other experts concluded that simple preventative measures could have forestalled the outbreak. Yet the UN has still not acknowledged that it was at fault. Lemay-Hebert comments that the UN has used Haiti's "lack of a proper sewage and sanitation system to […] absolve itself from responsibility for the outbreak."

It was only at the end of 2016 that the outgoing UN Secretary-General Ban Ki-moon issued a vague apology for the United Nations' "role" in the tragedy, and held out the prospect of reparations. What level of reparations, and in what form, is still unclear today. They certainly won't cover the whole $2.2 billion (€1.9 billion) that victims' advocacy groups demanded in a lawsuit filed against the UN in New York in 2013. Furthermore, the victims want to be compensated individually, which Lemay-Hebert considers unlikely. 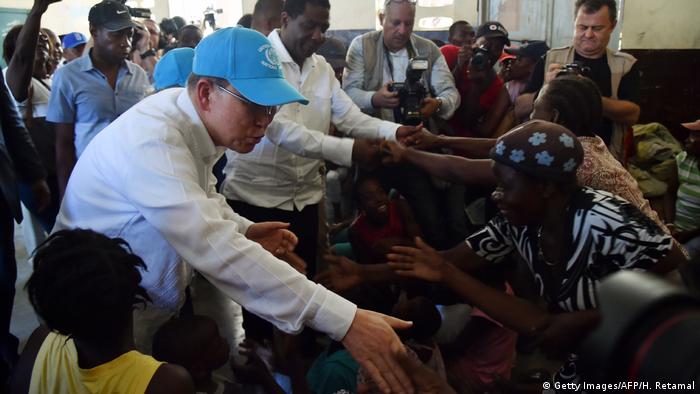 Were the UN eventually to decide to pay reparations for the cholera epidemic, the money would probably be administered collectively and put towards the construction of schools and hospitals. In this "completely broken country," though, this would be just a drop in the ocean. Lemay-Hebert and Lange both agree that what Haiti lacks is a functioning justice system, political stability, and — still — security. "Yes, I saw police," Lange reports, "but it's only really safe in areas where diplomats or foreign organizations are stationed."

Both political scientists find it difficult to make an overall assessment of the mission. The Canadian's is certainly not overwhelmingly positive. "Had it not been for the UN's presence, the transitional government would probably have been engulfed in the 2004–2006 surge of violence" that followed the coup. He writes, however, that long-term stabilization has failed for the most part, as structural violence still needs to be addressed in a comprehensive manner that encompasses the role of international policies. 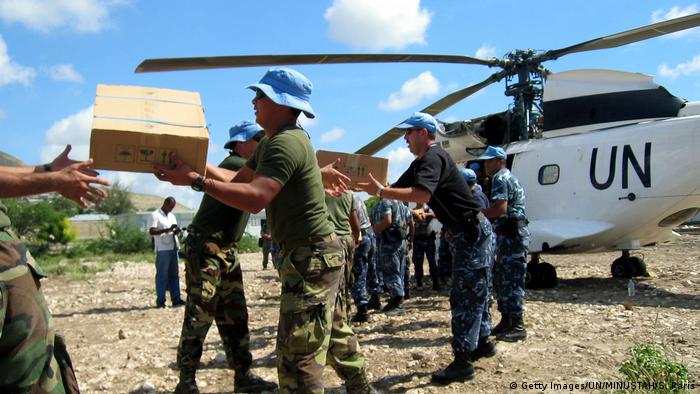 Lemay-Hebert believes the United Nations needs to completely rethink its operations. MINUSTAH, he says, has shown that where peace missions are concerned, "more" does not necessarily equal "better."

Lemay-Hebert, whose research focuses on the unintended consequences of peace missions and development aid, writes that these were more blatantly in evidence around MINUSTAH than any other UN mission. There must now, he says, be a detailed investigation of how the presence of thousands of UN personnel and non-governmental organizations affects the local population. Haiti, for example, is also about to experience a brain-drain, the political scientists believes, since educated Haitains who work as local employees in international humanitarian projects will look outside their countries' borders to pursue work that pays better than public-sector jobs at home.

If there is such a thing as a legacy of MINUSTAH, Lemay-Hebert is convinced it is this: "MINUSTAH has forced the UN into having a completely new discussion about the unintended consequences of peace missions."