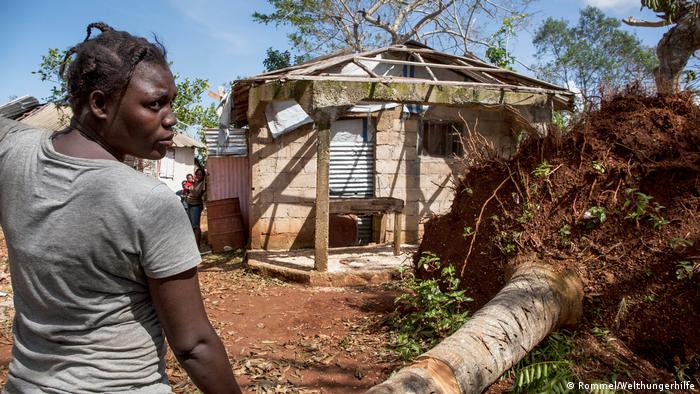 United Nations aid chief Stephen O'Brien says the strongest Caribbean hurricane since 2010 has triggered the worst humanitarian crisis in the country since the 2010 earthquake. The UN has launched a $120 million (108.3 million-euro) flash appeal to cover Haiti's needs for the next three months.

Reports of suffering among survivors of the storm that has officially killed at least 372 people are widespread. Local officials suggest the death toll is much higher; estimates around Grand-Anse top 500 in that region alone.

On the western tip of the island there have been reports of 300 patients with festering wounds lying silently on beds at the main hospital in the seaside village of Dame Marie. There is a shortage of medicine including pain killers for surgery and antibiotics for infection.

"There's no water, no antibiotics," Dr. Herby Jean said. "Everything is depleted. We hear helicopters flying overhead, but we're not getting anything."

The UN's World Food Program has tapped into food stocks previously set aside for schools to feed hundreds of desperate families, World Food Programme (WFP) spokesman Alexis Masciarelli said. Some 26 more tons of food have been moved into the area and more was on its way to Les Cayes, the other major city affected on the peninsula, he said.

US military helicopters are unloading boxes of supplies from the United States Agency for International Development (USAID) to be stored by the UN before being taken to other parts of the south.

But getting aid to Haitians now reduced to drinking unclean water and living in roofless houses will be challenging. Some villagers have blocked roads out of desperation in an effort to stop aid convoys from passing through without delivering supplies.

Mourad Wahba, the UN humanitarian coordinator in Haiti, urged aid organizations to delivering supplies to rural communities, where many families survive on subsistence farming and have had all their crops washed away.

If aid is only delivered to major population centers, the concern is that villagers will flock there for supplies and never leave, leading to overcrowding.

"We must think about developing a plan, to coordinate support and deliver it where it's most needed and not where it's easiest to access," Wahba said. 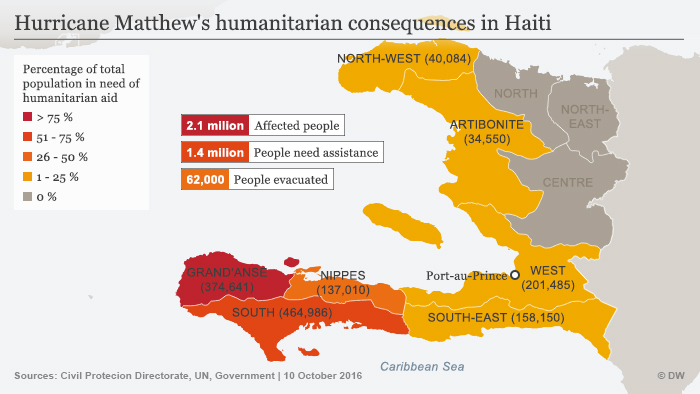 The World Health Organization (WHO) said on Tuesday that it was sending one million doses of cholera vaccine where new cases of the killer disease have risen in the wake of the storm's devastation.

"The top priority for those people affected by the hurricane is to give them access to clean water. That is the only way we can control cholera," Dominique Legros, WHO cholera expert, told reporters before departing for Haiti.

Already some 150 suspected cholera cases have been reported in Grande'Anse department and 50 in South department, he said. "It is more than usual, I know it is a sharp increase compared to usual figures," Legros said.

WHO was considering giving people a single dose of the vaccine rather than the classic double dose, to cover more people, albeit it with a shorter protection period.

UN peacekeepers have been blamed for introducing the disease to Haiti, where it has killed 10,000 people since October 2010.

UN officials had earlier estimated that at least 1.4 million people across the region need assistance and that 2.1 million overall have been affected by the hurricane. Some 175,000 people remain in shelters as entire villages have been flattened by the storm.

After Hurricane Matthew: Children in Haiti are unable to go to school

After Hurricane Matthew: Children in Haiti are unable to go to school