UN human rights chief Navi Pillay has criticized both Israel and Hamas at an emergency UN session in Geneva. She said the deaths of civilians and children in Gaza suggested Israel might be in breach of international law. 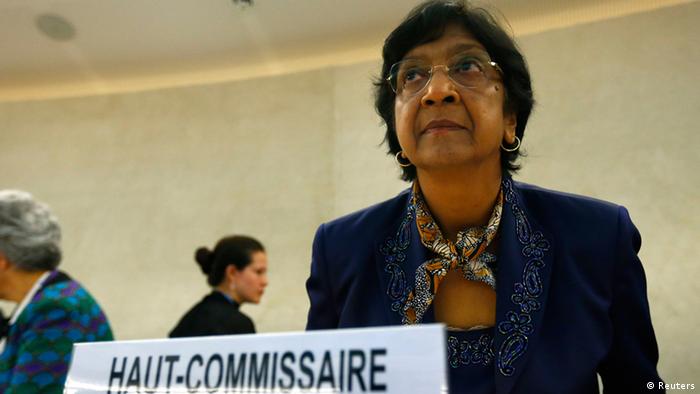 Israel's airstrikes and military actions in the Gaza Strip could amount to war crimes, the UN's high commissioner for human rights said in Geneva on Wednesday. Navi Pillay cited cases of Israeli airstrikes or shelling hitting houses and hospitals in Gaza.

"These are just a few examples where there seems to be a strong possibility that international humanitarian law has been violated, in a manner that could amount to war crimes," Pillay told the UN's human rights council, also pointing to attacks killing civilians and children.

She added that "147 children have been killed in Gaza over the past 16 days. They had a right to life, just like children in any other countries."

Pillay said Israeli children shared these rights and should also be able to live without fear of rocket attacks from Gaza. The indiscriminate nature of Hamas rocket fire, Pillay said, also clearly went against principles of distinction and precaution when identifying military targets.

Israeli and Palestinians representatives took part in the debate immediately after Pillay; each accused the other of war crimes while denying having committed them.

"Israel will destroy Hamas's military infrastructure," Israel's UNHCR ambassador Eviatar Manor told the debate. "However, the Gaza residents are not our enemy. Israle is fully committed to international law."

As the UNHCR met in Geneva, Secretary-General Ban Ki-moon and US Secretary of State John Kerry convened in Jerusalem seeking to broker a truce in Gaza.

"We have certainly made some steps forward," Kerry said on arrival. "There is still work to be done."

No US, European support for Geneva session

The UNHRC convened on Wednesday for an emergency meeting requested by Palestinians, with Pillay delivering the opening speech. Egypt and Pakistan also requested the session. Although 21 member countries and 16 observer states - across the Middle East, Asia, Africa and Latin America - endorsed the call for the emergency meeting, neither the US nor any European country supported it.

The Palestinian request sought an inquest into all military operations since June 13. Israel's regular airstrikes against Gaza began on July 8, with a ground offensive starting last Thursday. The earlier date given by the Palestinians refers to Israeli efforts during June to locate three kidnapped teenagers, found dead on June 30. Hundreds of Palestinians were detained during the search.

Since the aerial campagin began on July 8, some 600 Palestinians, most of them civilians, and 29 Israelis, 27 of them soldiers, have died.