Farming in the desert: Are vertical farms the solution to saving water?

With high temperatures and water scarcity, the Emirates might seem an unlikely place for a farm. Yet, as coronavirus and climate change heighten the desire for food security, could vertical farms be the solution? 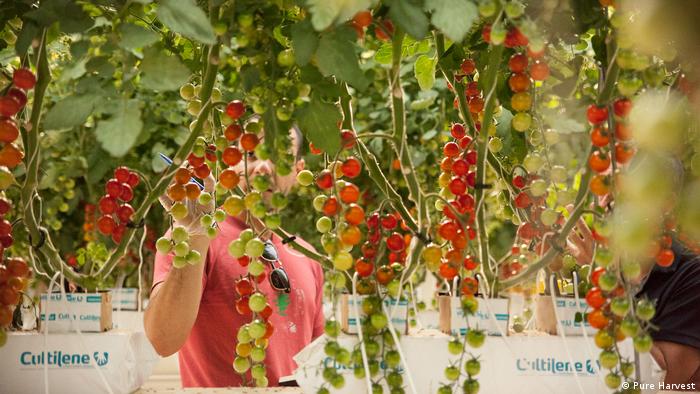 "When I told people I was going to grow tomatoes in the desert, they thought I was crazy," Sky Kurtz, founder of Pure Harvest Smart Farms, told DW.

With just an average 12 days of rain a year, less than 1% arable land, a desert location and an 80% import rate for food, the United Arab Emirates (UAE) seems an unfavorable place to set up a farm.

Kurtz is one of several entrepreneurs using high-tech farming techniques to boost crop production in the Emirates. Pure Harvest built the first climate-controlled greenhouse in Abu Dhabi in 2017.

Prompted by arid conditions and a desire for greater food security, the country is investing millions in technologies — such as vertical farming — that could make it an unlikely agricultural pioneer.

Read more: Goodbye to fields: What food production may look like tomorrow 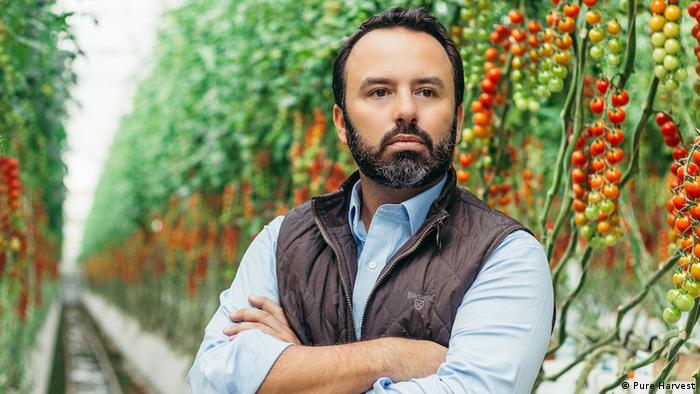 Vertical farms can grow a rich variety of different crops by stacking them in layers under LED lighting in climate-controlled greenhouses and watering them with mist or drip systems. The process is tailored to each crop's specific needs, resulting in high-yield, year-round harvests.

"It takes 30 to 40 days to grow leafy greens out in the field. We can grow that same crop in 10 to 12 days," says Marc Oshima, co-founder of Aerofarms. The company received funding from the Abu Dhabi Investment Office to build the capital's largest indoor vertical farm, with 800 different crops, by 2021. 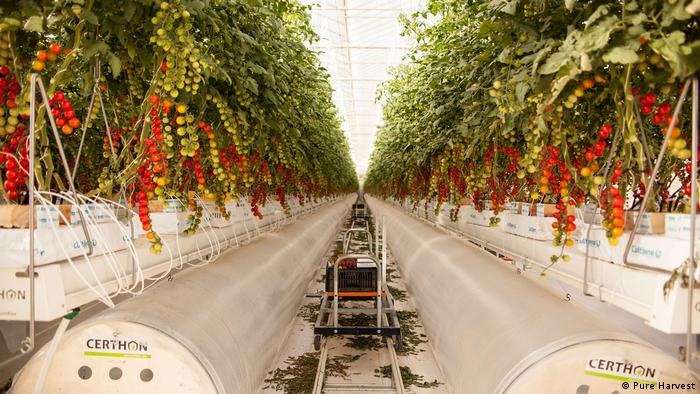 With vertical farming crops can flourish year round, far from traditional regions of production

The technology uses minimal land and up to 95% less water than conventional agriculture.

The hydroponics system places the plants' roots directly into a water-based and nutrient-rich solution instead of soil. This "closed loop" system captures and recirculates all the water, rather than allowing it to drain away — useful for a country like the UAE suffering from extremely high water stress.

Globally, agriculture accounts for 70% of freshwater withdrawals, and UAE is extracting groundwater faster than it can be replenished, according to the International Center for Biosaline Agriculture (ICBA).

"Water is very expensive over in the UAE, but energy is cheap as it is subsidized," says Jan Westra, a strategic business developer at Priva, a company providing technology to vertical farms.

The artificially controlled environment is energy intensive because the air conditioning and LED lights need a constant source of electricity.

This bringing forth of life in the desert could come at a high environmental cost. Most of that energy comes from carbon-emitting fossil fuels, even as the Middle Eastern country feel the effects of climate change.

By 2050 Abu Dhabi's average temperature is predicted to increase by around 2.5°C  in a business-as-usual scenario. Over the next 70 years patterns of rainfall are also expected to change. 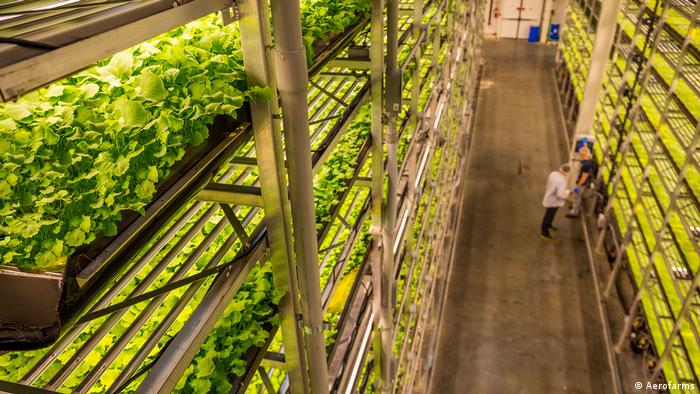 Aerofarms has received funding from the Abu Dhabi Investment Office to build the capital's largest indoor vertical farm, with 800 different crops, by 2021

Although Pure Harvest is building a solar-powered farm in neighboring Saudi Arabia, its UAE operations get electricity from the carbon-intensive national grid.

Investing more in renewables "is a goal of ours," Kurtz told DW. He said the company has not set a clean energy target but is working on various green power projects, including a plan to integrate solar power generated in UAE into its operations.

However, Willem van der Schans, a researcher specializing in short supply chains at Wageningen University in the Netherlands, says sustainability and clean energy should be "inherent in the technology and included in plans when starting a vertical farm."

He argues that many vertical farming companies are not sustainable in terms of energy as they still view clean power as an optional "add-on."

Ismahane Elouafi, director general of the government funded ICBA in Abu Dhabi, acknowledges that vertical farming has some way to go before achieving "real sustainability," but she believes the innovations are "promising."

By 2050, the UAE government wants to generate almost half its energy from renewable sources.

Fred Ruijgt, a vertical farming specialist at Priva, argues that it's important to factor transport and refrigeration into the energy equation. Vertical farming uses more energy to grow crops than traditional agriculture, but because crops are grown locally, they do not have to be transported by air, sea or truck over long distances. 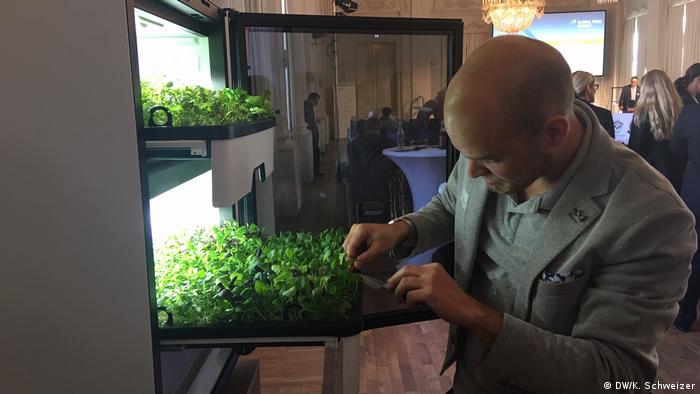 Vertical farming installations come in all shapes and sizes, meaning food can grow where land and water are scarce

"The energy saving is difficult to calculate exactly, but the advantages of locally grown crops are huge," he says, adding that those grown in vertical farms not only use less water and pesticides, but that they also have a longer shelf life due to minimal transportation time.

In 2018, the UAE set out its vision to become a hub for high-tech local food production.

Companies and investors have flocked to the region, attracted by the 0% corporate tax rate, low labor costs and cheap energy. With their help, UAE aims to reduce its reliance on imports and make its food system more resilient to shocks like climate change and pandemics.

Oshima from Aerofarms says the coronavirus pandemic has brought "greater appreciation of how fragile the supply chain is and raised questions about food safety and security."

When the UAE went into lockdown in April, imported supplies of perishable goods like vegetables fell and business boomed for local suppliers.

ICBA's Elouafi said they have helped keep the UAE well-stocked during the pandemic.

"With the help of local food production and adequate imports, there has been absolutely no shortage of food in the UAE," Elouafi told DW.

Climate change, however, poses an altogether more complex threat to the country in the long-term. Given climate change's likely impact on food production, she says vertical farming has shown it is "an economically viable proposition even with harsh climatic conditions."