As Neuschwanstein marks the 150th anniversary of its groundbreaking ceremony, a team from Bavaria's criminal investigation office has found its forgotten cornerstone. The famous castle still fires the imagination. 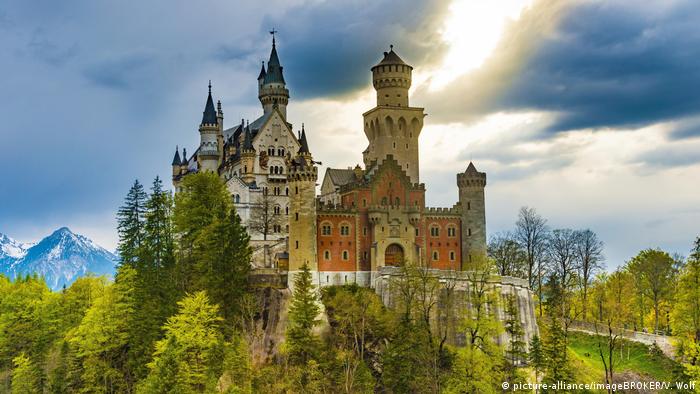 On September 5, 1869, Bavaria's fairytale king Ludwig II had the cornerstone laid for the most expensive building project of his time: Neuschwanstein Castle. At the time, the reclusive king himself was residing at another of his retreats, Berg Castle, his manor house on Lake Starnberg. The cornerstone's location was later forgotten.

In celebrating this sesquicentenary of the groundbreaking ceremony, the Bavarian Palace Administration has now been able to shed light on its whereabouts. With the aid of specialists from the Bavarian State Criminal Police Office, which routinely defuses unexploded ordnance and incendiary material, the cornerstone with its embedded round brass capsule has been located. 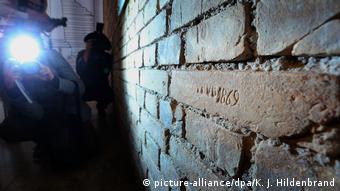 In the spotlight: the actual cornerstone was discovered slightly above this engraved brick

It lies right near one of the bricks dated 1869 in the south wall. Possibly the stone marked the corner of the castle structure as it was originally planned.

The Palace Administration does not intend to remove the stone, as the site is historically listed. The find is a minor sensation. The brass capsule embedded in it contains, among other things, the original construction plan and a portrait of the king, painted on porcelain.

A captivating castle and a lucrative brand

This most famous of all the castles in Bavaria is as shrouded in mystery as the man who had it built: Ludwig II, for whom the castle served as a private place where he could retreat to his dream world.

When the cornerstone was laid in 1869, Ludwig never dreamt that he would be seized in his remote dream castle and declared legally incapable on grounds of insanity shortly before his death. It is also possible that he had just as little sense of foreboding about how much the building would cost. Building the castle, which remained unfinished in his lifetime, and which he had furnished with the latest technology, such as heating and automatic flush toilets, consumed huge sums of money the equivalent of well over a hundred million euros. 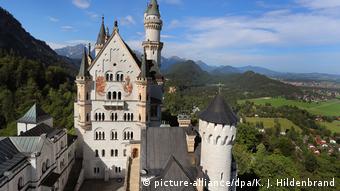 View from the tower of Neuschwanstein Castle: a wild folly in stone in the mountainous Allgäu region

Thanks to the ongoing influx of tourists the castle has long since recouped the king's building debts. To date, 60 million people have visited Neuschwanstein. They come despite restoration work that is set to continue until 2022: the castle rooms have been undergoing complete renovation for two years, for the first time since the castle was opened to visitors more than 130 years ago. Outside, the scaffolding on the historic gatehouse has already been dismantled and the gate now glows in new splendor — and is a popular photographic subject for tourists.

Bavaria captivates tourists with its rustic traditions, royal palaces, and, of course, the Alps. (15.05.2019)

Time seems to have stood still in this small Bavarian town: Visitors here feel like they are in the Middle Ages. Many houses from this era have been preserved in Rothenburg. Join us on a visit with an all-round view. (02.09.2019)