UN warns migrant children are missing out on education

The UN says countries aren't doing enough to integrate a growing number of refugee children into their national education systems. A new report has revealed that Germany alone requires tens of thousands of new teachers. 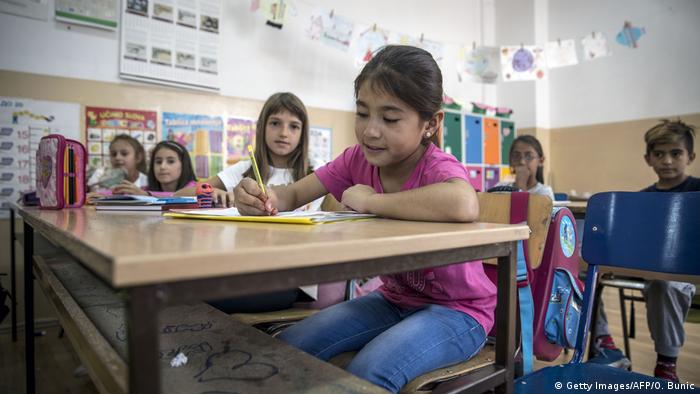 In a report released in Berlin on Tuesday, the UN agency for culture and education, UNESCO, warned that far too many refugee children are still being denied access to quality education.

The 2019 Global Education Monitoring Report, Migration, displacement and education, shows that a shortage of trained teachers and funding is hampering efforts to integrate migrant students.

'Education is the key'

"Everyone loses when the education of migrants and refugees is ignored," UNESCO Director-General Audrey Azoulay said in a statement. "Education is the key to inclusion and cohesion. Increased classroom diversity, while challenging for teachers, can also enhance respect for diversity and be an opportunity to learn from others."

Manos Antoninis, director of the education report, warned countries not to get complacent and "think the job is done once immigrants are in school. They are being excluded in so many other ways."

Too often, these students "end up in slower school tracks or in under-resourced establishments in troubled neighborhoods," he said.

German Development Minister Gerd Müller told the Funke newspaper group that Germany would increase its funding for the education of young people in emergency situations such as war from €16 million ($18.3 million) to €31 million.

Around 75 million children in crisis situations have no opportunity to go to school, the minister said, and "we have to act decisively now, otherwise they will grow up without prospects."

Europe must do more: The report highlighted the fact that a lack of integration and language teaching means first-generation migrant children are twice as likely to drop out of school than local pupils in the EU.

Designing with users, building on existing ideas and understanding the ecosystem are some of the prerequisites for success when creating digital projects in education argues Becky Telford from UNICEF. (20.06.2016)

UN: Half the world’s refugee children can’t go to school

Four million refugee children around the world are excluded from education, according to a United Nations report. A solution should be to allow refugees to attend regular schools, the UNHCR has demanded. (29.08.2018)