Despite wealth Germany struggles with illiteracy | Germany | News and in-depth reporting from Berlin and beyond | DW | 08.09.2016

As the world marks UNESCO's International Literacy Day (September 8-9), you wouldn't think illiteracy would be a problem in a rich country like Germany. You'd be wrong. Millions of Germans are functionally illiterate. 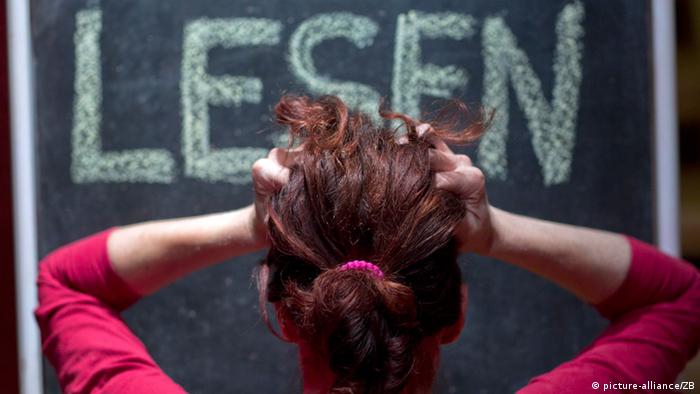 Germany may be known as the "land of philosophers and poets," but literacy advocates say some nine percent of the population is unable to read and write beyond a third-grade level. The most recent study, carried out by Hamburg University in 2011, put the number of functional illiterates in the country at an astonishing 7.5 million.

How can a wealthy country that puts so much emphasis on education produce so many people lacking the most basic of skills in a modern society? Ralf Häder, the director of the Federal Association for Alphabetization and Basic Education, says that there are many reasons why people in Germany may fail to learn to read and write.

"Often, but not always, the problem is how people were raised as children," Häder told Deutsche Welle. "Were books read at home? Could their parents read? Some families don't consider education that important, so that if children have problems at school they don't get much support. And the German education system focuses on the better pupils. Not much attention is paid, if two or three children can't keep up. And sometimes it's down to individual tragedies. If a child's mother dies, for instance, as he's just starting school, he can easily fall behind."

Awareness of the problem has been growing. And Markus Fels, spokesman for the Ministry of Education and Research says that in 2015, the German government and the 16 individual federal states announced a 10-year, 180-million-euro ($203 million) program, called the Decade of Alphabetization, to combat illiteracy.

That sounds like a lot of money, but Häder points out that it amounts to less than 2.5 euros per year per person affected.

"It's far too little," Häder says. "If we consider the figure of 7.5 million, then it's a gigantic segment of the populace, compared with the money being invested."

He argues that far greater sums are needed, given the inherent difficulties of setting up effective literacy courses and getting people to attend them. 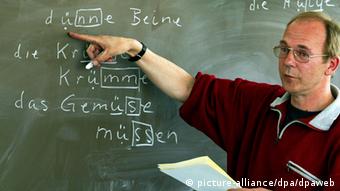 Primary responsibility for combating illiteracy, Häder explains, rests with Germany's Volkshochschulen, or adult education centers, which are required to offer reading and writing courses. But there's no financial incentive to publicize them. People can take the course essentially for free, while the centers have to provide classrooms and teachers. And classes need to be small-sized to be effective.

"The standard with literacy courses is that the maximum number of students should be no more than 6 to 8," Häder says. "There is a gigantic spectrum of types of functional illiterates, from people who can barely recognize the alphabet to people who can read somewhat fluently but have problems writing. You can't offer everyone the same instruction. It would be like teaching grades 1 through 4 simultaneously."

Häder says that private literacy schools, church organizations and volunteer initiatives are sometimes better able to address the problem. But another challenge is getting illiterates to seek help.

"At the moment, there are around 20,000 people enrolled in literacy courses," Häder told DW. "Compared to 7.5 million, that's far, far less than one percent. There needs to be a drastic change in society. We need sufficient courses. We also desperately need a publicity campaign so that those who can't read and write are willing to overcome the stigma and tackle their problem." 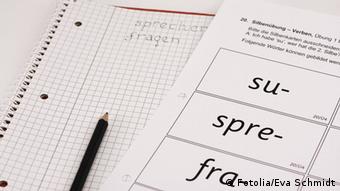 Only 20,000 people are currently enrolled in literacy courses

Feelings of fear and shame

What's the situation on the ground, at the institutions teaching adults to read and write? The Lesen und Schreiben Verein (Reading and Writing Association) in Berlin is a private initiative, founded in 1983, that offers literacy courses for unemployed people.

Lesen und Schreiben is partly funded by local unemployment offices. There, at any given time, 30-60 jobless people are taught to read and write by a mix of paid employees and volunteers. Volunteers, association director Urda Thiessen told DW, are essential for offering the necessary one-on-one tutelage. She agrees that stigmatization is a major obstacle.

"It's hard to convince people to learn to read," Thiessen says. "They've arranged their lives and have come up with crutches to help them through. They say: 'Everything has always been fine. I don't need to read and write.' Maybe they're just trying to protect themselves. Illiteracy makes many people feel afraid and ashamed. Many people have already tried to learn to read and write before and failed."

Students at the association learn to read and write half the day and then take courses intended to help them return to the working world. The approach is holistic, and the aim is to teach students to teach themselves, because, as Thiessen says, "They won't be with us forever." She says she's happy with the support she receives form the Berlin city government, although more money would allow them to teach more people.

"They think: Everyone's talking about teaching refugees to read and write German and the need for money and courses, but no one says a word about us any more," Thiessen said. 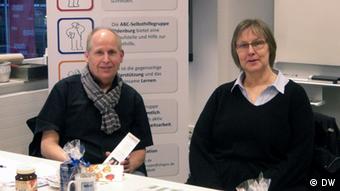 Self-help groups and volunteers help to combat the problem

So will the Decade of Alphabetization and other initiatives be able to reduce the numbers of illiterates in Germany? Neither of the literacy advocates Deutsche Welle spoke to was very optimistic.

"Since the 2011 study, more people have gotten involved," Häder says. "Nevertheless, we can't assume that in five years we'll only have 6 million functional illiterates."

Thiessen pointed out that the issue is a general educational one.

"I don't know whether the problem will get worse, but I see in schools, and teachers tell me, that they have little time to pay individual attention to pupils and can't adequately compensate for difficulties at a student's home," Thiessen told DW. "So I don't have much hope that there won't be another generation of illiterates. And I'm talking about German native speakers, not refugees - that's a completely different topic."

If everyone in Germany learned to read and write in schools, there would be no need for adult courses to remedy that deficit. But on the 50th anniversary of UNESCO's International Literacy Day, Germany is still far from making that ideal a reality.

Never Too Old To Learn