The UN War Crimes Tribunal upheld the conviction Tuesday of Bosnian Serb military leader Ratko Mladic, 78, known as the "Butcher of Bosnia," for his role in the genocide in Srebrenica, the siege of Sarajevo, and other war crimes.

The verdict is final and cannot be appealed any further.

Mladic was convicted in 2017 and sentenced to life in prison for his role as Bosnian Serb military commander during the war in Bosnia, which lasted from 1992 until 1995.

The court upheld Mladic's conviction at the now-shuttered International Criminal Tribunal for the former Yugoslavia. The five-judge panel Tuesday was led by Presiding Judge Prisca Matimba Nyambe of Zambia.

Nyambe dissented from the other judges in the majority of their findings, including in their rejection of Mladic's argument that Srebrenica had been evacuated on "humanitarian grounds."

The chamber also dismissed in its entirety an appeal by the prosecution, and found that Mladic was not guilty of a wider genocide in against Bosnian Muslims and Bosnian Croats over the course of the war.

Who is Ratko Mladic?

Ratko Mladic commanded Bosnian Serb troops during the war in Bosnia, including those responsible for the 1995 massacre of more than 8,000 Muslim men and boys in the eastern Bosnian town of Srebrenica.

Mladic was indicted at the end of the war in 1995 but remained a fugitive until 2011. His lawyers appealed his conviction and life sentence on the basis, they claim, that he was not responsible for the actions of troops under his command.

Video footage from Srebrenica shows him speaking calmly to a 12-year-old Muslim boy before soldiers under his command massacred upwards of 8,000 civilians in the town. He is recorded telling a camera when he returned to the town days later, "We give this town to the Serb people as a gift."

Munira Subasic, president of the "Mothers of Srebrenica" told DW that Mladic's troops committed genocide wherever they could.

"Mladic was destroying everything that did not belong to the Serb people," she told DW's Bosnian service.

"To us 'Mothers of Srebrenica' he is the same as Hitler to Jews."

"It's more important to them to learn the truth and to tell their children, not to have their children live a lie, then it is to us," she added. "We know what happened."

How was he captured?

First indicted in 1995, he went into hiding and became a fugitive from justice for 16 years. Initially, he had a lavish lifestyle as he was supported by the Serbian military, but his fortunes turned in 1999 with the downfall of Serbian nationalist president Slobodan Milosevic.

In 2011, he was captured by the then Western-looking Serbian government at his cousin's country house in the northern Serbia and given over to the custody of the court in The Hague.

Mladic long tried to cast an image of himself as "a simple man" who was chosen by "fate" to protect his people, blaming the devastation of his country on "the Vatican and Western mafia."

Trained in Belgrade in the early 1960s, Mladic was known for confounding international negotiators during the war with long-winded lectures on Serbian history.

By the end of the war in Bosnia, even his closest allies questioned his mental state.

The late former president of Montenegro, Momir Bulatovic, once told a BBC documentary in the 1990s that he "respected General Mladic as a soldier and a man," however "after three years of war, he'd lost contact with reality."

During the war in 1994, his daughter Ana killed herself. Mladic's last request was to visit her grave before being transferred to the court.

German Foreign Minister Heiko Maas tweeted that he was "relieved" by the Hague tribunal's verdict. He said he hoped the rejection of Mladic's appeal would be "a certain consolation for the victims and the bereaved."

US President Joe Biden hailed confirmation, saying it would provide "solace to all those who are grieving."

"This historic judgment shows that those who commit horrific crimes will be held accountable," Biden said in a statement. "It also reinforces our shared resolve to prevent future atrocities from occurring anywhere in the world."

Why is the court's decision significant?

Mladic's legacy continues to divide Bosnia. For the widows and mothers of his victims in court Tuesday, the decision to uphold his conviction represents a degree of justice and acknowledgment of their trauma.

Before the ruling, UN prosecutor Serge Brammertz stressed the importance of the Mladic ruling for victims who continue to live with the trauma of the conflict daily. 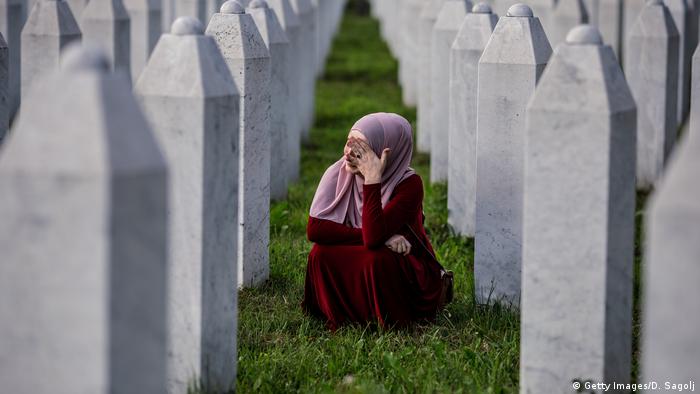 A Bosnian Muslim woman cries between graves of her father, two grandfathers and other close relatives, all victims of Srebrenica genocide

"If you speak to the survivors, the mothers (of Srebrenica) who lost their husbands, their sons, their lives really stopped on the day of the genocide," Brammertz told reporters.

Mela Softic, 37, a marketing specialist who spent her childhood in besieged Sarajevo, agrees. She told Reuters, "Twenty-five years later, I feel as if the war is not over."

However, among many Bosnian Serbs, especially war veterans, Mladic is revered as a hero.

Milorad Dodik, the leader of the Serbian part of Bosnia, Republika Srpska told reporters just last month, "There was no genocide in Srebrenica. There is no credible evidence or any other evidence that it was genocide."

The UN prosecutor Brammertz told AFP, "Denial of genocide is the last phase of the genocide."

The work of the International Criminal Court, also seated at The Hague, is widely viewed as the permanent outgrowth of earlier efforts to hold those charged with carrying out war crimes accountable, like the tribunal focused on the former Yugoslavia.

Correction: A previous headline for this article incorrectly called Mladic the "Butcher of Serbia." This has been changed to "Butcher of Bosnia."