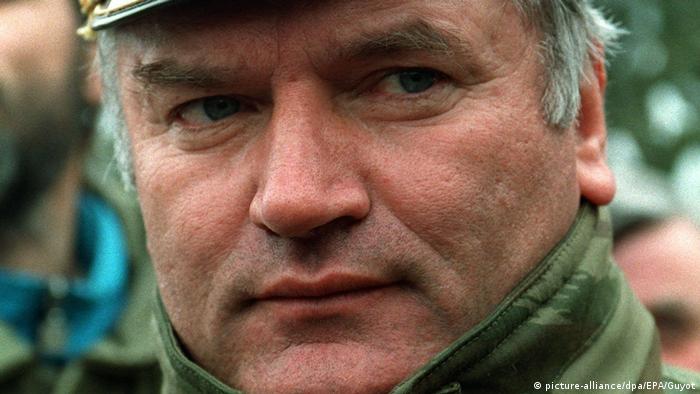 Mladic returned to the United Nations court in The Hague on Tuesday to appeal his 2017 conviction for genocide and crimes against humanity during the Yugoslav Wars.

Both the defense and prosecution appealed the verdict. Mladic's team asked for an acquittal while the prosecution wants a guilty verdict for genocide in six other municipalities.

Read more: Who is Ratko Mladic, the 'Butcher of Bosnia'?

On Tuesday, a frail-looking Mladic appeared in court wearing a mask because of coronavirus regulations, which he later removed. Wearing a suit with his red tie askew, he initially complained that he could not follow the hearing through headphones.

"This hearing today is inappropriate and threatens... a miscarriage of justice, such that I cannot abide to be a silent participant in this questionable proceeding," defense lawyer Dragan Ivetic told the court in opening remarks. "I am unable to meaningfully gain instruction from Mr. Mladic, or be assured that he is able to meaningfully follow proceedings."

Lawyers for Mladic have repeatedly complained about his ill health, but in a written ruling before Tuesday's hearing, judges said that the lawyers hadn't "substantiated that Mladic is unable to communicate, consult with his counsel, and/or understand the essentials of proceedings."

Mladic, 77, is currently serving a life sentence after being found guilty of overseeing the slaughter of 8,000 Muslim men and boys at Srebrenica in 1995 and attacking and murdering civilians during the 43-month siege of the Bosnian capital Sarajevo. The massacre at Srebrenica is regarded as one of the worst atrocities in Europe since the Holocaust.

Trial judges ruled that he was responsible for massacres of Bosnian Muslims and "ethnic cleansing" campaigns as part of a plan to forge a Greater Serbia out of parts of the former Yugoslavia, together with Bosnian Serb leader Radovan Karadzic and Serbian leader Slobodan Milosevic. Mladic was the commander of Bosnian Serb forces during the 1992-95 war that was part of Yugoslavia's breakup.

About 100,000 people were killed and 2.2 million others displaced in the Bosnian war, which erupted as communal rivalries tore Yugoslavia apart after the fall of communism.

Mladic had been hiding from justice in Serbia for 16 years before he was finally arrested in 2011.

The former general will be allowed to address the court for 10 minutes on Wednesday. Judges have yet to set a date for a decision, likely to be sometime in 2021.