The UN refugee agency has called on Jordan to let in 12,000 Syrian refugees stranded on the border. They are fleeing airstrikes as well as individual violence. 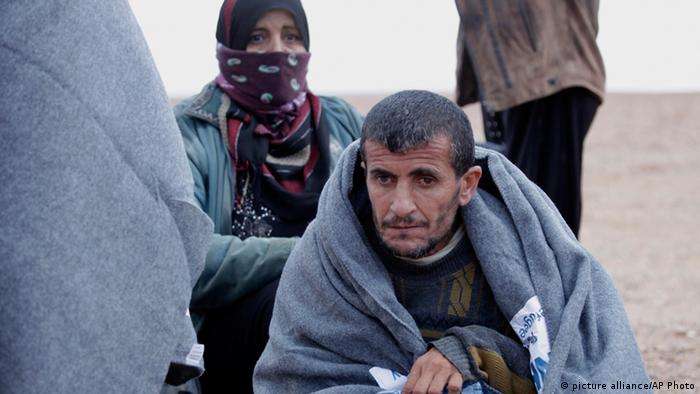 The United Nations High Commissioner for Refugees (UNHCR) said the number of refugees at Syria's remote northeastern border with Jordan has risen from 4,000 to 12,000 in recent weeks.

Speaking at a press briefing in Geneva on Tuesday, UNHCR spokeswoman Melissa Fleming said the sudden increase was due to Russian bombing of areas controlled by the self-declared 'Islamic State' (IS) in eastern Homs, such as Palmyra, and in Raqqa province and city.

"It includes elderly people, it includes people who are sick and wounded, it includes children, women and others who are vulnerable and really need help," Fleming said.

The Syrians were also fleeing punishments imposed on civilians by IS militants, including forced marriages, beheadings and floggings.

Research and advocacy group Human Rights Watch (HRW) said Jordan was putting many lives at risk by blocking the refugees who have gathered near an earthen wall or berm. Nadim Houry, deputy Middle East and North Africa director of HRW, said in a statement "Jordan should stop stranding people in remote border areas for months on end and swiftly screen them in the country's well-established transit centres."

The UNHCR has appealed to Jordan to allow in the most sensitive cases, Fleming said.

The number of refugees entering Jordan in the last 18 months has fallen as tens of thousands returned to Syria or emigrated to other countries. A number of unofficial border crossings have been closed since May 2013 and the numbers entering the country this year has slowed to fewer than 50 people per day, according to the UNHCR.

There are 632,228 Syrian refugees currently in Jordan. Fleming said that the UNHCR understood Amman's concerns over security but that "If refugees are not admitted to Jordan and substantial assistance is not provided, the lives of refugees will be at risk in the coming months," she said.

President Joachim Gauck on Tuesday drew attention to the food and education needs of refugees after a visit to the Azraq camp in Jordan, the country's second-largest center. "We have to understand that every dollar, every euro spent on education and training is a way of preventing the spread of terrorism," Gauck said.

On a two-day visit to Jordan, Gauck said the international community should not accept the scaling back of food distribution programs.

Azraq is around 100 kilometers east of the capital Amman and is currently sheltering around 28,300 people, according to the UN. It is expected to expand its capacity to take in up to 130,000 refugees.

Also on Tuesday, the UNHCR released the results of a preliminary questionnaire of over 1,200 Syrian refugees who arrived in Greece between April and September. The aim was to develop a profile of the first groups arriving so that protection and assistance needs could be better met.

The EU has announced that it will contribute 1.5 billion euros in aid to Syrian refugees to counter the rise in food prices caused by Russia's invasion of Ukraine. DW spoke with UNHCR High Commissioner Filippo Grandi about the plight of the refugees.