UN takes proactive role in world politics after Arab Spring | World| Breaking news and perspectives from around the globe | DW | 15.05.2011

After fading from the international limelight when the US unilaterally invaded Iraq in 2003, the UN Security Council has returned to center stage by demonstrating a renewed willingness to use force to protect civilians. 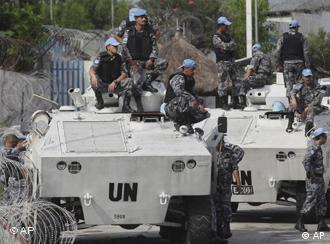 The UN authorized force in Ivory Coast and Libya

The United Nations Security Council (UNSC) has adopted a more proactive role in international politics in recent months as the world has been rapidly confronted with one crisis after another. In the civil wars in both Libya and Ivory Coast, the UN mandated the use of "all necessary means" to protect civilian life.

This willingness to decisively confront international crises comes after years of a post-Iraq malaise in which the Security Council largely took a back seat as the United States unilaterally pursued its national interests around the world.

But as popular uprisings have rapidly spread from one Arab country to another, the Security Council has become the focal point of international efforts to adopt common positions on crises that impact global stability.

The council has demonstrated itself willing and capable - under the right political circumstances - of using military force and economic sanctions in order to enforce international law and human rights.

"In many ways the [Security] Council has become more active on all those fronts in terms of coercive instruments," Edward Luck, Special Advisor to UN Secretary-General Ban Ki-moon, told Deutsche Welle.

In the case of Iraq, the UN Security Council ultimately came to an impasse when the US and UK pressed for a second resolution to mandate force in order to coerce Saddam Hussein to comply with weapons inspectors.

The other three veto-wielding members - France, China and Russia - rejected Washington's and London's calls for the authority to use force. Unwilling to wait for UN inspectors to complete their investigation of Baghdad's alleged weapons program, Washington unilaterally invaded Iraq without a Security Council mandate.

Manuel Fröhlich, an expert on the UN with Friedrich-Schiller-University in Jena, acknowledged that the differences over Iraq led to a major crisis that challenged the Security Council's ability to preserve international peace and stability.

However, he says that the refusal of the Security Council to authorize the invasion of Iraq can also be viewed as a demonstration of the body's integrity.

"Many people believe that by not issuing a second mandate for the Iraq War, the Security Council showed its relevance and upheld the functions of the body by not bowing to American pressure," Fröhlich told Deutsche Welle.

"After 2003, the US went back to the UN for approval for its continued military presence in Iraq, it looked for UN support for state building in Iraq and Afghanistan," Gowan, who is with the European Council on Foreign Relations, told Deutsche Welle

"The Bush Administration actually turned to the UN and relied on the UN far more than it admitted or others recognized," he added.

Although the UN proved unable to reach a consensus in the case of Iraq, the recent popular uprisings in the Arab world have pressured the veto-wielding Security Council members to adopt more consistent positions on intervention and human rights.

When the uprising in Libya degenerated into violence as leader Moammar Gadhafi's forces marched on the opposition-stronghold of Benghazi, the Security Council authorized the use of force to protect civilians.

"The verbage coming from Gadhafi and some of his supporters in calling protesters cockroaches and saying they'd go house to house searching for these people - it just sounded as if he was preparing for a bloodbath in Benghazi and elsewhere," Luck said 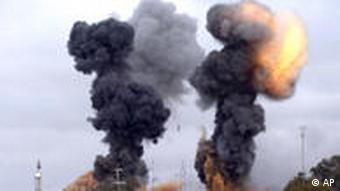 "Given that cockroach was a term used in Rwanda in 1994 in the genocide against the Tutsis, it sounded very much like an echo from the carnage of 1994 and I think people were quite aware of that."

Rule of law in Ivory Coast

Already in crisis mode from Libya, the Security Council began to take a more aggressive stance toward the simmering conflict in the West African country of Ivory Coast.

As fighting between the internationally recognized presidential election winner Alassane Ouattara and incumbent Laurent Gbagbo intensified around the main city, Abidjan, the UN called on its peacekeepers to eliminate Gbagbo's heavy weapons.

"The Security Council found itself in a difficult position because it had moved so quickly to stop a humanitarian disaster in Benghazi that it would have faced public political shame if there had been a massacre in Abidjan that people could have called the new Srebrenica," Gowan said, referring to the massacre of Bosnian Muslims by Serbian forces in 1995.

According to Fröhlich, the UN-sanctioned interventions in Libya and Ivory Coast have bolstered the Security Council after the Iraq crisis and given concrete political meaning to the concept of protecting civilians, a measure passed by the UN General Assembly in 2005 but rarely put into practice.

"Up until now that was a non-binding declaration of the UN General Assembly, and the Security Council was very hesitant to make the protection of civilian populations a prioritized goal that would carry immediate military consequences."

Fröhlich argues that the Security Council's increasing use of the International Criminal Court to investigate war crimes, as in the case of Libya, is forging a new understanding of the value assigned to protecting civilians and has made preventing war crimes a central aim of the international community.

Although protecting civilians and preventing war crimes have become a serious priority for the UN in Ivory Coast and Libya, the Security Council has proven - up to this point - either unwilling or unable to address the government crackdown on peaceful protesters in Syria.

While condemning the crackdown in Syria, Luck says that the violence has not yet escalated to the level that caused the Security Council to intervene in Libya.

The Syrian military has deployed armor against protesters

"There's sometimes this assumption that the Security Council is a machine that sort of automatically responds in a particular way to a particular situation [but] its 15 sovereign member states," Luck said.

"Those of us who believe very much in values and in principles sometimes would like to see more consistency on the part of the council, but we have to recognize that it is ultimately a political body."

As a political body, the Security Council ultimately intervenes only when the national interests of the five permanent veto-wielding members - US, France, UK, China and Russia - do not conflict.

Gowan says that typically those great powers can come to a consensus only on crises that are peripheral to their own geopolitical interests.

"The UN deals with those crises."

With the crackdown on pro-democracy protests in Syria showing no sign of abating, the international community is reluctant to follow the same path to intervention that it took when dealing with the situation in Libya. (29.04.2011)

The UN intervened to uphold human rights in Libya and Ivory Coast, deploying the "Responsibility to Protect" for the first time. Yet competing interests and visions of world order make intervention inconsistent at best. (19.04.2011)

The international criminal investigation against Gadhafi may have limited impact on the Libyan conflict. But it could also give protesters in other Arab countries new momentum in their bid to force democratic reforms. (17.03.2011)