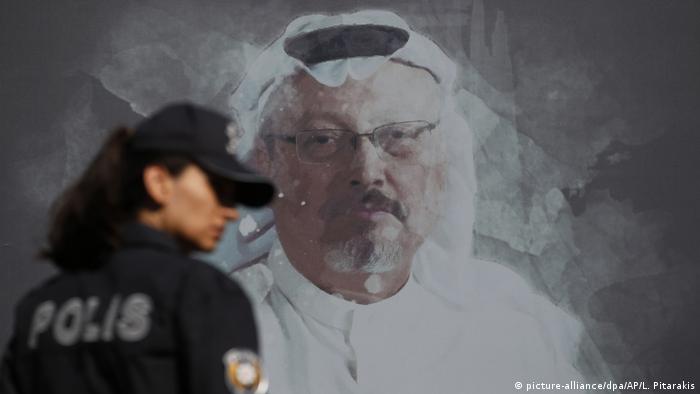 Nearly 30 countries on Tuesday criticized Saudi Arabia before the UN Human Rights Council, accusing it of detaining women's rights activists and failing to bring the perpetrators of journalist Jamal Khashoggi's murder to justice.

"We remain deeply concerned by reports of torture, arbitrary detention, enforced disappearances and detainees being denied access to essential medical treatment and contact with their families," said the statement made by 29 countries, a vast majority of them Western nations.

Speaking on behalf of the EU, Michael Freiherr von Ungern-Sternberg — the German ambassador to the UN in Geneva — called on Saudi Arabia to end the "prolonged detentions of women's rights defenders."

At least five women's rights activists remain in detention, including Loujain al-Hathloul, who long campaigned for women to drive. Until 2018, Saudi Arabia was the only country in the world to legally forbid women from driving an automobile.

Earlier this month, a Saudi court found eight people guilty of involvement in his assassination in Istanbul. The Saudi government has rejected allegations of involvement or links to Crown Prince Mohammad bin Salman. None of the defendants were named and five others were acquitted.

"We stress the need for full accountability and transparent prosecution of those involved in the killing of Jamal Khashoggi," said von Ungern-Sternberg.

Saudi Arabia was a member of the council from 2017 to 2019. However, UN officials suggested that Riyadh was once again seeking a seat at the table.

Human rights groups have called on Saudi Arabia to act on the council's latest recommendations in order to prove its commitment to human dignity and respect, values that lay the foundation for international human rights law.

"The immediate and unconditional release of the women's rights activists and human rights defenders would be a litmus test of the Saudi government's political will to improve the human rights situations," said Salma el-Hosseiny of the International Service for Human Rights.

Other practices in Saudi Arabia that tend to diverge from the international consensus on what constitutes upholding human rights include executing people by public beheading, severely restricting women's rights compared to men's, and having the death penalty available for purported "crimes" including apostasy (renouncing one's religion), homosexuality, sorcery or witchcraft, and blasphemy.