UN General Assembly: Germany struggles to define its place in the world | World | Breaking news and perspectives from around the globe | DW | 24.09.2021

UN General Assembly: Germany struggles to define its place in the world 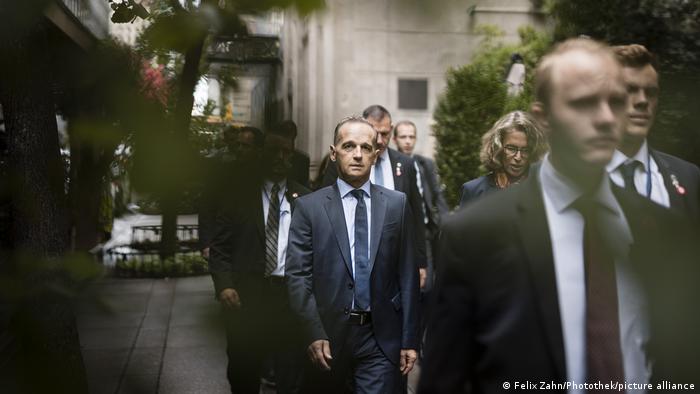 Germany is still pondering its role on the global stage

It's morning at the German mission to the United Nations and diplomats are buzzing around the lobby, getting set for one of the many "side events" that flank the UN General Assembly (UNGA).

Germany is hosting a meeting on the Libyan peace process, an attempt to keep the country on track to holding democratic elections for the first time ever at the end of the year.

Foreign Minister Heiko Maas has made securing stability in Libya one of his signature issues during his four years in office. Speaking to DW in New York on the eve of election back in Germany, at the end of the Merkel era and what's expected to be his final UNGA, he said he's proud of what's been accomplished.

"The civil war is over and the cease-fire is holding… The fact that we've managed to achieve this together with others in the 'Berlin Process,' is, I believe, a very, very positive development, and one of the few cases around the world where it's been possible to resolve a conflict."

For Maas, a quietly spoken Social Democrat from the tiny state of Saarland on the French border, this is what Germany is all about on the world stage: bringing others together to solve problems in a setting they can trust. It's unflashy, unarmed and uncertain to succeed: the embodiment of the multilateralism that Germany traditionally professes to the world.

Today's meeting is the latest in a series Maas has hosted, trying to navigate tensions among Libya's previously warring factions on the one hand, and between rival groupings of foreign forces sponsored by the likes of Turkey and Russia on the other.

It's complicated. And today, there's an added source of tension in the air.

For the first time, and by pure chance, France and America's top diplomats will be in the same room since an almighty row blew up between Paris and Washington last week. The cause was a US defense deal with Australia that left France out of pocket to the tune of €50 billion ($59 billion). It has nothing to do with Libya, but everything to do with the atmosphere as the talks get underway.

US Secretary of State Antony Blinken is among the last to arrive for the meeting.

"Jean-Yves!" he exclaims, a strained smile framing his eyes as he sets them on his French opposite number, Foreign Minister Le Drian. The men briefly shake hands, exchanging the politician's staged familiarity of pats on the upper arm, before Blinken quickly moves on through the room. 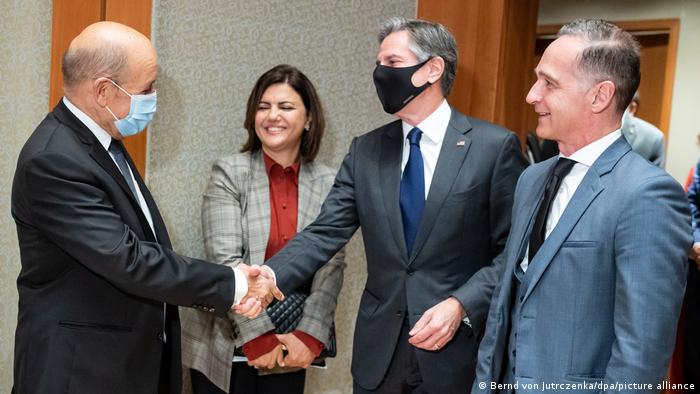 Maas looks on with the air of someone who has invited an unhappy couple to dinner.

An awkward photograph with the hosts follows before the two men sit down, placed directly opposite each other at the round table, condemned to facing each other for the duration.

When Le Drian emerges from the building later, he is in no mood to tell DW how it all went. He bustles past with a "Merci, bonne journee a vous!" ("Thanks, have a good day!").

The dispute between the US and France was a framing story of this year's General Assembly, having broken just before the gathering began.

It was a melodrama per excellence, featuring polyamorous relationships, broken promises, wounded pride and a very large amount of money.

By the end of the week, Presidents Joe Biden and Emmanuel Macron had held a phone call to try to patch things up, with a promise of a meeting in person soon. But the impact on Germany — and other allies — was deep.

Diplomats were shocked by the US deal with Australia, which had been negotiated in secret and took France totally by surprise. For Macron, a proud leader of a proud nation who will soon face a tough election, it was a humiliation in plain view of the voters — and the world.

For Maas, watching this play out was a "sobering" experience of how the US could treat its allies.

"Of course everyone asks themselves: 'What if this happened to us?' And this caused a lot of disquiet."

Coming so soon after the chaotic withdrawal from Afghanistan, where US allies hadn't been fully consulted, the episode added to concerns that when it came down to it, Biden could be as hard-nosed as former President Donald Trump. Biden's slogan "America is back" was suddenly ringing hollow.

Germany would have found it hard to condemn Washington's move outright — Berlin had recently won concessions from Biden over the bitterly controversial Nord Stream 2 pipeline linking it to Russian gas. A case where Germany showed it could defend its own position as doggedly as anyone.

But doubly perplexing about the Australian deal was the fact that it centered on the Indo-Pacific, the very region where the Biden team is most focused on rallying democratic allies to its side, for a pushback against authoritarian China.

For Maas, this made Western disunity counterproductive.

"We in the EU need an Indo-Pacific strategy that's coordinated with the US," he told DW. "There can't be any decisions that cast doubt on that."

'A recipe for trouble'

And yet, across First Avenue in the General Assembly chamber, the week brought a very different warning — against where such Indo-Pacific strategies may be heading. 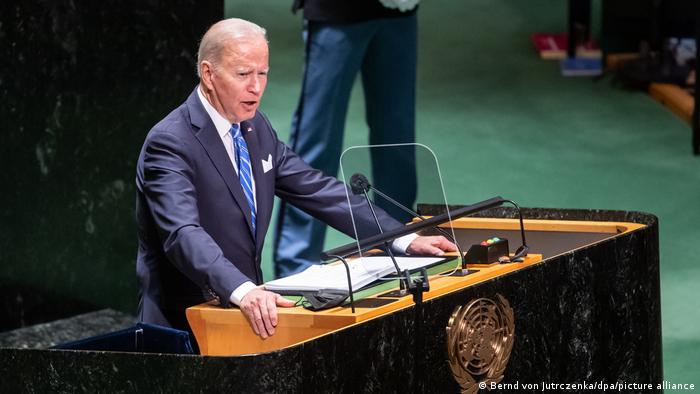 In his speech, Biden said 'we are not seeking a new Cold War'

Antonio Guterres, secretary-general of the UN, used his opening address to admonish the US and China for pushing the world toward a dangerous confrontation just as it needed to come together to address existential crises in the climate, in health and much besides.

"I fear our world is creeping towards two different sets of economic, trade, financial and technology rules," he said, "and ultimately the risk of two different military and geopolitical strategies."

"This is a recipe for trouble," Guterres added. "It would be far less predictable than the Cold War."

Biden hit back in his own address. "We're not seeking — I'll say it again — we are not seeking a new Cold War or a world divided into rigid blocs," he insisted.

But the fear of a world pulling apart is real, and particularly strong in Germany. Memories of war and division are still raw, and today's business relations with China are central to its economy.

So as the General Assembly went on, the questions facing Germany about its place in the world only seemed to deepen, while its ability to shape this swirl of events stood out as starkly limited.

Is a united Europe the answer?

For Maas and many others, "European sovereignty" is part of the answer — turning the EU into a security power of its own.

"We see that the United States wants to engage most in the Indo-Pacific and possibly no longer in other regions where it was before. That inevitably raises questions for the European Union," he told DW. "It will be necessary to have a European position of our own, what we call European sovereignty."

And beyond the EU, Maas says multilateralism must be key. At the UN General Assembly in 2019 he co-launched the "Alliance for Multilateralism," as an antidote to "America First."

This week it convened again, now with 60 members, including the United States itself. Speakers took turns to pronounce their commitment to the idea.

"We know that multilateralism is hard work. That it takes time," said Maas, ending the final speech of his term in office. "But we also know that it is worth it."